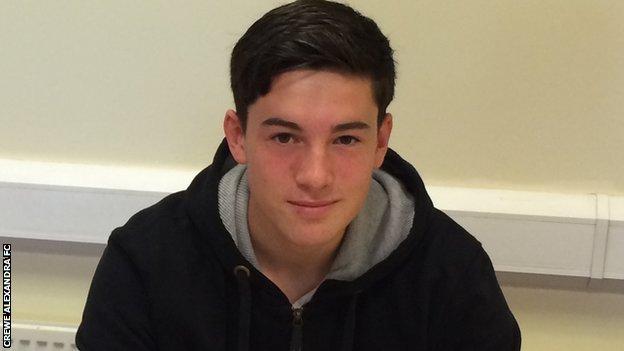 The Wales Under-19 international had attracted interest from Premier League clubs, but has opted to continue his football education in Crewe's Academy.

"I always wanted to stay at Crewe because I grew up here," said Saunders, 18. "I've been here since I was six.

"I know that, if I'm good enough, I'll be able to play in the first team."

"Because I'd scored quite a few goals for the Under-18s this season there was a bit of interest. But I've been at Crewe all my life. I know everyone here and all my mates have signed," he told BBC Radio Stoke.

"Hopefully, by the end of the season I'll be pushing for the first team. Steve Davis said I'm going to be playing in the Under-21s to start with, so I'll try to get a few goals, play well and then try to push on for the first team."

Saunders has just returned from the Under-19 European Championships in Portugal, where he scored for Wales in their final game group game against Greece just a minute after coming off the bench.

Meanwhile, Davis admitted his approach to summer rebuilding depends on whether they are successful in persuading Arsenal loan signing Chuks Aneke return to Gresty Road, and in keeping his two out-of-contract players, Byron Moore and Max Clayton.

"Much will depend on whether Max and Byron sign again," said Davis. "We need another forward now that Chuks Aneke and Uche Ikpeazu have returned to their clubs and A J Leitch-Smith has moved on.

"But we have signed a number of young players from our Academy and one or two of them may surprise us next season. We are not expecting them to come through straight away but are excited by their potential.

"I need to replace some of the lads we have let go, not all of them. We can replace some from within and we have a decent sized squad already.

"If I can find three more quality players to help us then that would be a real plus."