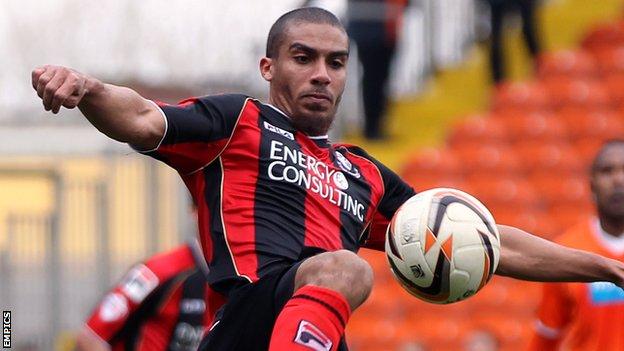 The 26-year-old, who scored 22 goals in the second tier last season, had a £3m release clause in the Cherries contract he signed in January.

But the Canaries have not necessarily had to match that amount.

"It's good to start a new chapter, get going again with Norwich and hopefully get promotion," he said after agreeing a three-year deal at Carrow Road.

"I've played here before and the atmosphere's been great, the fans are great. It's exciting to be a part of the club now and hopefully do well for them."

Cardiff had an offer for Grabban accepted in May, but the Welsh side have since added Javi Guerra,Federico Macheda and Adam Le Fondre to their squad.

Bournemouth boss Eddie Howe confirmed the fee was a record for a Cherries player and added: "It is a huge amount of money, especially when you take into account the investment that was made in Grabs just two years ago."

The former Crystal Palace forward netted 21 times while in League Two with Rotherham two years ago, a haul which prompted his move to the Cherries.

He scored 13 goals in League One in the 2012-13 season to help the Dean Court side win promotion to the second tier.

But he has failed to find the net more than seven times in any of his previous campaigns, which has included loan spells at Oldham, Motherwell and Brentford, as well as a three-year stay at Millwall.

City boss Neil Adams, who was appointed permanently last month, added: "He will provide pace, intelligent movement and a high work ethic to the front line, and of course he showed in the Championship last season that he is capable of scoring a variety of different goals.

"Lewis possesses precisely the type of attitude, application and quality that I expect from my players, and I am really looking forward to integrating him into the squad."