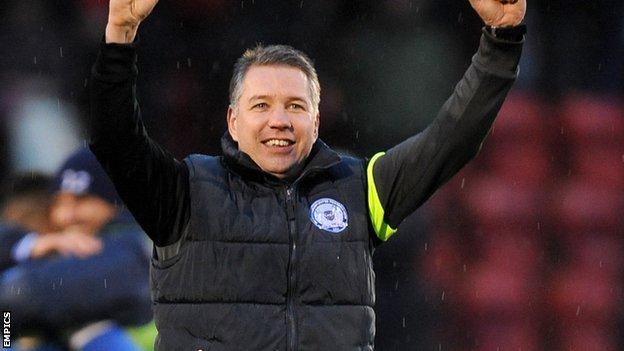 Peterborough United boss Darren Ferguson has signed a new three-year contract at the League One side.

The 42-year-old has won three promotions in two spells in charge of Posh, but failed to guide them back to the Championship last season.

He had 12 months to run on his previous deal, which he signed when he returned to the club in January 2011.

Assistant manager Kevin Russell has left Posh by mutual consent and will be replaced by youth coach Gavin Strachan.

Ferguson took Peterborough from League Two to the Championship in his first two full seasons in charge, before leaving for Preston in November 2009.

Posh were subsequently relegated before Ferguson returned to guide them back to the second tier in 2011.

But it has been a difficult 12 months for the former Manchester United and Wrexham midfielder, having suffered relegation from the Championship on the final day of the 2012-13 campaign and then losing in this season's play-off semi-finals to Leyton Orient.

"It was a good meeting and we agreed a three-year deal would make sense. We've got some very good plans for the next few years."

Ferguson added: "After lengthy talks between the chairman and I regarding the future, he showed me such support again.

"I explained my vision of how we continue to be a success both in the development of our players and also on the pitch.

"It is a blow to lose Kevin as he has been with me during all my time as a manager and without him our success would never have been possible and I cannot thank him enough, but we both felt the timing was correct."