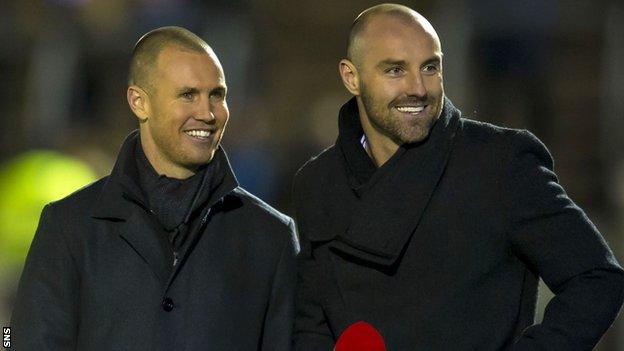 Miller is back at the Glasgow outfit for a third time, while Boyd, who is out of contract with Kilmarnock, is also thought to be interesting Rangers.

There's a few more years on the clock since I was here the last time, but I still feel fit, I still feel strong

"I'm sure if anyone at the club would be looking to do that then Kris would be willing to come back," said Miller.

"He was a fantastic player for this club in the past and scored a lot of goals for us."

Miller and Boyd formed a potent Rangers frontline for two seasons before the latter headed for Middlesbrough and his Scotland team-mate eventually exited for Bursaspor.

Dundee United are one Scottish Premiership club to have expressed an interest in Boyd, who is expected to decide his future within a fortnight, but Rangers manager Ally McCoist is also an admirer.

"If it was to come about, I'm sure it would be something everyone would be interested in," said Miller, who agreed a release from Vancouver Whitecaps last month.

Rangers have added Miller to their squad for next season's bid for promotion to the Scottish Premiership despite continuing question marks about the League One champions' finances.

Some fans are boycotting season tickets in protest against the club's board, but the 34-year-old insists he did not seek assurances about the club's future before agreeing to sign.

"I don't know enough about it to make any serious comment on it," said Miller.

"For me, it was all about coming back to this club, pulling on that jersey again, scoring a lot of goals and getting us back to where we belong.

"I just hope all the stuff off the field can sort itself out and me and the rest of the players can concentrate on the football side."

Compared to the one Miller left in 2011, the present Rangers squad is not filled with current internationals.

He said: "For me as a player, the club is no different at all. It's still a fantastic place to come and work and the atmosphere is always positive."

Miller has retired from international football but insisted he was not a short-term stop-gap and could still perform at the top level should Rangers step up from the Championship after next season.

"There's a few more years on the clock since I was here the last time, but I still feel fit, I still feel strong," he said.

"I was playing at the highest level only a matter of months ago against England at Wembley."