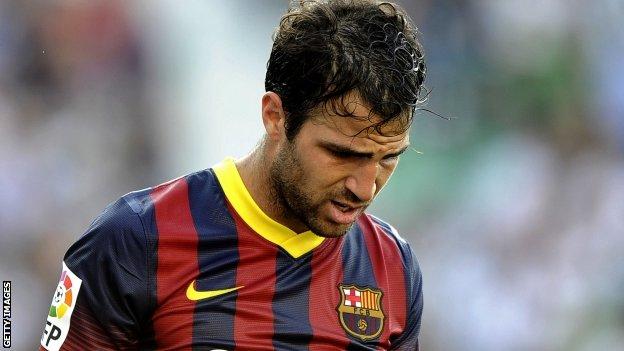 Arsenal have informed Barcelona they will not be exercising a buy-back option on former player Cesc Fabregas.

The Gunners inserted the clause when selling Fabregas to Barcelona for £35m in 2011 and were given first refusal after Barca decided he could leave.

It is understood Fabregas, 27, was keen to return to Arsenal but manager Arsene Wenger is not looking to recruit a creative midfielder.

The decision raises the prospect of the player joining one of Arsenal's rivals.

Mesut Ozil arrived at Arsenal from Real Madrid last summer for a club-record £42.4m on a five-year contract, while the likes of Aaron Ramsey, Santi Cazorla, Jack Wilshere, Alex Oxlade-Chamberlain and Tomas Rosicky are all part of Wenger's plans.

Arsenal's priority is to bring in a striker to compete with Olivier Giroud and a right-back to replace Bacary Sagna, with goalkeeping cover also needed after the exit of Lukasz Fabianski.

They may also look to sign a defensive midfielder if the right deal is available but their stance over Fabregas, who is available for £30m, means he is now open to the market.

The Spaniard, who started his career at Barcelona and still has two years of his existing contract to run, has been linked with Chelsea following the departure of Frank Lampard and his future is expected to be decided in the next two or three weeks.

On Thursday, his international team-mate Gerard Pique was caught on camera apparently telling Spain coach Vicente del Bosque that 'he [Fabregas] told me that it is already done, he is leaving already, 33m euros he said', but the pair are thought to have been joking.

Fabregas was the subject of two unsuccessful bids from Manchester United last summer and told BBC Sport in February he was "flattered" by their interest.

He is part of the Spain squad set to begin their defence of the World Cup against the Netherlands on 13 June.