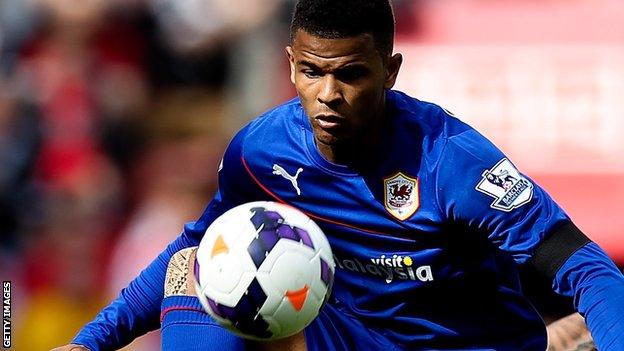 Cardiff City striker Fraizer Campbell is expected to speak to Leicester City about a move to the newly promoted Premier League outfit.

The Foxes have triggered a release clause in the 26-year-old's contract by offering a sum close to £1m.

But the Bluebirds could struggle to hold onto Campbell following their Premier League relegation.

Solskjaer has already strengthened his attacking options for next season, signing Javi Guerra,Federico Macheda and Adam Le Fondre as they seek to bounce straight back from the Championship.

Forwards Joe Mason and Nicky Maynard will also return after spending time away on loan, while Kenwyne Jones and youngsters Jo Inge Berget and Rhys Healey are the other strikers in the senior squad.

But the Bluebirds would prefer to keep Campbell as well, who was signed from Sunderland in January 2013 for £650,000.

The former Manchester United forward scored seven goals in 12 matches to help the club gain promotion to the English top-flight for the first time in 51 years.

This season he scored six Premier League goals for the Bluebirds, including two in the 3-2 win over the eventual champions Manchester City as well as one in the 2-2 home draw against Manchester United, plus three in the FA Cup.

It was not enough to help the Bluebirds stay up, however, as they finished bottom of the table.