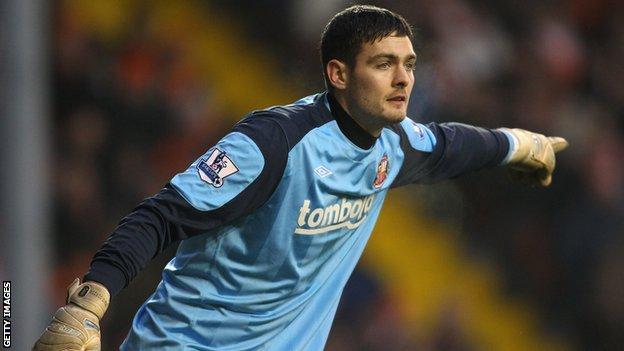 Celtic have confirmed that they are close to signing former Hearts and Sunderland goalkeeper Craig Gordon.

The Scotland international has not played for nearly two years.

"He came, he trained with us and was excellent - so we might be close on that one," said Lawwell, speaking as Ronny Deila was introduced as the club's new manager.

"Stevie Woods couldn't have spoken highly enough of him.

"He has been in training with us and we're just going through discussions with his agent at the moment to see if anything comes out of that."

Gordon, who has undergone medical tests at the club, has struggled with knee injuries since leaving Sunderland in 2012.

However, having trained with Hearts and Rangers earlier this year, the 40-times capped goalkeeper is close to making a return to the game.

Motherwell expressed a possible interest in Gordon in April and he previously spent time coaching with Dumbarton.

Deila admitted that he still had to assess his current squad but was aware of Gordon's quality.

"I know he is a good goalkeeper but has been injured for a while and trains with us now," he said.

After coming through the ranks at Tynecastle, Gordon was sent on loan to Cowdenbeath before making his first-team debut at Hearts in 2002. He soon became first choice and made his Scotland debut in 2004.

A £9m move to Sunderland followed in 2007, but he twice broke an arm and was recovering from a knee injury when he was released by the Black Cats.

Gordon has spent the last two years working with physiotherapists to rebuild his fitness.