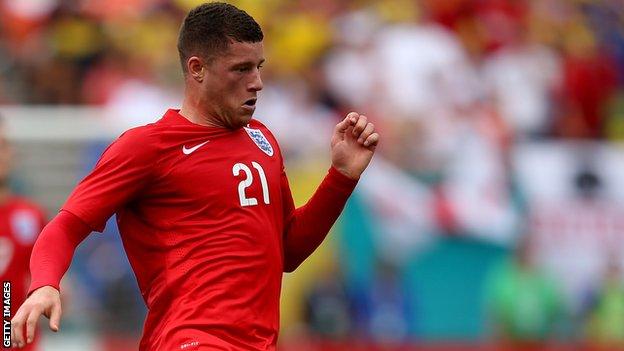 Roy Hodgson's glass was half-empty when he responded to widespread enthusiasm and excitement about Ross Barkley with public dissection of the England prodigy's faults.

Instead of outlining the Everton youngster's capacity to add unpredictable brilliance to England's World Cup campaign in Brazil, manager Hodgson was deadpan as he listed Barkley's poor decision-making and occasional careless in possession.

If it was a ploy designed to cool the Barkley debate, the end result was exactly the opposite.

Frank Lampard, England's captain against Ecuador, was only too happy to offer the praise that Hodgson was so reluctant to deliver. If the manager's glass was half-empty, Lampard's was overflowing.

For the sake of balance, Hodgson was absolutely right with much of his analysis. These are flaws in Barkley's game but few 20-year-olds pitch up at a World Cup as the finished article.

Hodgson's reaction to Barkley - claiming there was now an "obsession" with him only 24 hours after saying exactly the same about Wayne Rooney - provoked two schools of thought as the debate continued here in Miami.

Frank Lampard was not so reticent in his praise for Ross Barkley and this is something he has seen before when Wayne Rooney also came out of Goodison Park to star for England in Euro 2004 as a 17-year-old.

He said: "There are similarities in there, their build, where they came from and where they play. You can't deny that. Again it's that fearlessness of youth. I see the similarities. Great ability, running at people and that's what you want to see.

"I'm sure he will have learned a lot from that game in terms of positions to pick up, times to turn, times not to turn but when you've got players like that in a team, players who can run away from people and make things happen then you're very happy.

"He's only going to get better."

And even Roy Hodgson, in his quieter moments away from the microphones, will agree with that.

The first school suggested Hodgson was simply showing his years of experience by reducing the hype around Barkley and removing any possibility of him being painted as England's latest saviour - while privately preparing to play him against Italy in Manaus on 14 June.

The other is the sense that Hodgson may just feel Barkley's natural feel for the ball, running power and ability to produce something out of the ordinary may just be outweighed by the failings he highlighted against Ecuador, when he faces quality such as Andrea Pirlo and Italy.

The truth may currently reside somewhere in between and Hodgson still has time, and another friendly against Honduras here on Saturday, before having to make up his mind.

The great former manager Sir Bobby Robson used the same tactics with Paul Gascoigne before accepting he could no longer keep him on the sidelines at Italia 90.

Hodgson expanded on his thoughts on Barkley as he said: "I suppose you've got to understand that at my stage in life and with my experience, I'm quite keen to have to dampen that down.

"So you'll have to excuse me. I don't mind you building him up and I don't mind what you write. All I'm saying is don't put it in my mouth because I want to keep a more even keel on it."

Hodgson added: "He's got drive. He's got energy. But he has also got a lot to learn as well, not least of all when he needs to release the ball, when he can turn with it, when he just needs to secure it because for every good turn there was a time when he lost the ball and put us on the back foot defensively.

"But he'll be happy with his performance and I think he justified the fact I've taken him with us on this adventure we're embarking on because a player of his type, with confidence and who is prepared to take an awful lot of risks with the ball, means there are times in games when we will need him.

"He's a talented boy. I'm not criticising him. I'm just making certain people don't get too carried away because we know it's too easy to concentrate on the good things. You would need to watch the game for 90 minutes through my eyes and see the performance as a whole and not the cameo moments where he did brilliantly."

It was the cold, clinical dissection of a trained eye but just occasionally there may be a time to celebrate a player's talent rather than hurl a bucket of ice cold water over those wishing to do the celebrating.