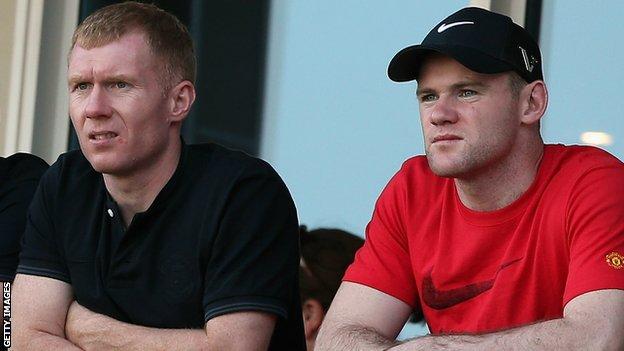 Wayne Rooney has shrugged off criticism from his former Manchester United team-mate Paul Scholes that he may be past his peak.

The England striker was responding to comments from Scholes, who questioned whether Rooney was "worn out" after a long career.

Rooney, 28, said: "He's been a team-mate but he's been away from the first team for a long time.

"I'm not interested. He's got his opinions so let's leave it at that."

Scholes, 39, who played alongside Rooney at Old Trafford until his second retirement last May, speculated on whether England's management team would have the courage to drop him.

His comments sparked a national debate on Rooney's World Cup role and whether manager Roy Hodgson should pick him in his starting line-up in Brazil.

But the forward answered his critics on Wednesday by scoring his 39th England goal in the 2-2 friendly draw with Ecuador in Miami's Sun Life Stadium, while playing in a left-flank role.

Rooney added: "I've seen a lot of you saying he's coached me and been around the team, but he hasn't. I'm not really going to react.

The Manchester United striker confirmed he has recovered from the groin injury he suffered at the end of the domestic season and declared he would be fully fit to play in England's World Cup opener against Italy.

Rooney has previously expressed reservations about playing on the left-flank for his club but said he has no problems about fulfilling that role.

"The manager didn't have to tell me what to do," said Rooney.

"I know how to play that role. I've played it many times and I have no problem doing that.

"I can play in different positions. I've proved that over the years. It is down to the manager. It is not about me it's about the team. If the manager wants to play me up top, in behind, left, right I'm happy to do that."

England start their campaign against Italy on 14 June before taking on Uruguay (19 June) and Costa Rica (24 June).