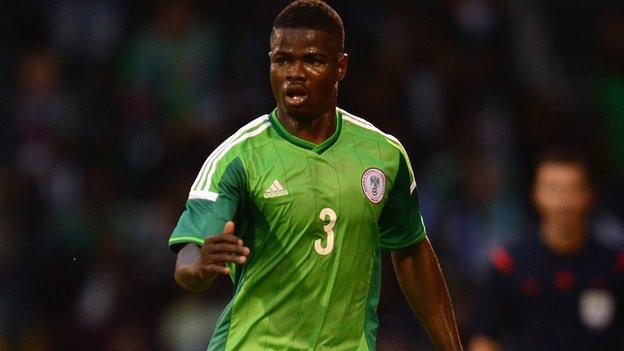 Nigeria duo Elderson Echiejile and Ahmed Musa have injury worries just a week before the start of the World Cup.

Echiejile has a suspected hamstring strain and will miss Saturday's final friendly against USA in Florida before the team heads for Brazil.

Super Eagles coach Stephen Keshi intends to give the Monaco defender as long as possible to prove his fitness.

"The doctors have an appointment for an MRI scan for Elderson to know the extent of the problem," said Keshi.

"We will know exactly what the problem is and where we go from there."

CSKA Moscow winger Musa is a doubt to face USA with a thigh strain.

Nigeria have until 24 hours before their opening game against Iran on 16 June to replace any injured players.

Better news for Keshi is that defender Juwon Oshaniwa has resumed training after a bout of malaria.

"Juwon is just coming back after three or four days out with malaria and Musa is a little bit injured, otherwise we are about 95% healthy players."

"Hopefully everybody will be fine before we leave for Brazil."

Keshi is convinced the African champions will produce a better performance against the USA than they did on Tuesday as they drew 0-0 with Greece.

"I was asking for a lot but we only started training as a team last week. But I needed to push and ask for more. I only saw our style in the last 15 minutes against Greece," he said.

"I was not happy with the performance against Greece but I hope our play against the USA will be much better."