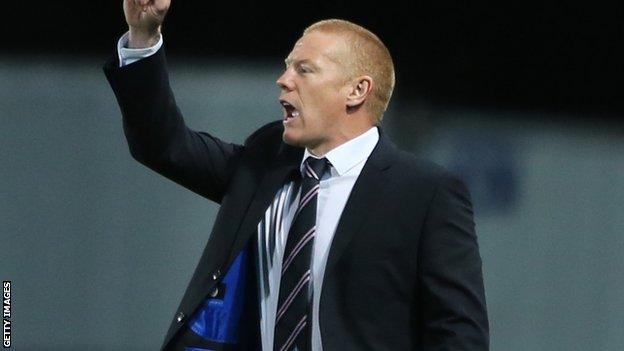 Gary Holt has said he only quit his job as Falkirk boss to work with Norwich City manager Neil Adams.

The former Canaries midfielder ended his 14-month spell in charge of the Bairns to assist Adams at Carrow Road.

"Don't get me wrong, I love being a manager," 41-year-old Holt, who worked in the Norwich academy with Adams, told BBC Radio Norfolk.

"I don't think I would have left for anyone else. Neil came calling and he's a friend and somebody I believe in."

Former Canaries winger Adams took over from Chris Hughton for the final five games of the season, but failed to keep the club in the Premier League.

He was handed the job permanently though this summer and appointed Holt and youth-team coach Mark Robson as his first-team coaches, as well as former Manchester City boss Joe Royle as a football consultant.

Holt, who played for Norwich between 2001 and 2005, led Falkirk to a third-place finish in the Scottish Championship this season.

"It was a big decision. I loved my job," said the Scot.

"But when you get a phone call from someone who you trust and believe in, it was a decision I had to take seriously.

"It was unexpected. We have a trust together and he wanted me to be part of his belief that we can do well."

One of Holt's first jobs will be to persuade fellow Scot Robert Snodgrass that his future lies at Carrow Road.

The 26-year-old fans' player of the season is expected to attract interest from Premier League sides, but the midfielder still has 12 months to run on his deal.

"He's under contract at a wonderful club," said Holt.

"I will fight tooth and nail to keep him. As Neil will. We want players to buy into what Neil is trying to do and that's win promotion."