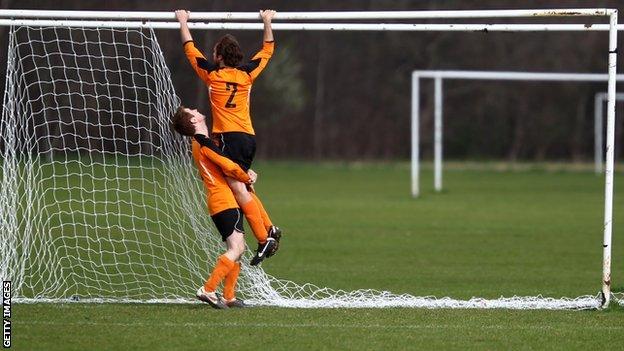 The Local Government Association (LGA) is calling for the Premier League to pump more of the £3bn it makes each year back into local football programmes and facilities.

The LGA also wants the Football Association to provide a bigger percentage after its annual report for 2012-13 showed that the FA had recorded a turnover of £299m.

"The FA and Premier League do run some good local initiatives, but it is now time for them to dig further into their deep pockets," said Simon Henig, vice-chairman of the LGA's Culture, Tourism and Sport Board.

"If funding was increased and administered by councils, the money could be spent more effectively to increase the number of youngsters playing football."

The Premier League and FA Facilities Fund, managed by the Football Foundation, commits £34m per year to improving the nation's grassroots football facilities. This includes £12m a year each from the FA and Premier League, and £10m from the government.

However, this amount is almost half the £60m per year that used to be given to fund grassroots facilities and less than 1% of the £5.6bn the Premier League receives from TV revenue alone - the biggest total of any league in the world.

An FA spokesman said: "We certainly recognise the overall decrease in football facility funding across local authorities in England and this is a continuing and growing problem for the grassroots game.

"However, up to 80% of all pitches in England are under authority control and therefore not under the control of the FA.

"We would remind the LGA that the FA - as a not-for-profit body - channels in the region of £1m a week into the grassroots of the game in England through its National Game Strategy.

"Through the Premier League and the FA Facilities Fund we invest over £30m every year into facilities alone."

Henig added: "The football industry is booming with profits and TV revenues rising by staggering amounts each year.

"In stark contrast, councils have been hit with unprecedented 40% cuts and face challenges to provide essential services such as caring for the elderly, collecting bins and fixing roads.

What is the Premier League and FA Facilities Fund?

Local football facilities are to receive £102m of investment over the next three years after the Premier League, the FA, and the government (via Sport England) committed to financing a new Fund that will provide grants towards developing new or refurbished grassroots football facilities.

The Fund will be delivered by the Football Foundation on behalf of the funding partners, and will provide financial support toward the development of new or refurbished community sports facilities. It began providing this investment from mid-January 2014.

"Grassroots football is played almost exclusively on council-owned pitches but these funding pressures are impacting on the quality of facilities and making it difficult for football players and clubs who enjoy regular football to complete fixtures and play games."

"All of this activity is part of our £56m per season investment in good causes."

In March, the FA learned it would lose £1.6m of public funding for the amateur game in England after failing to reverse a sharp decline in the number of people regularly playing the sport.

Sport England, the body responsible for distributing public money to increase sports participation, said the reduction was a clear message the governing body needed to change its strategy.