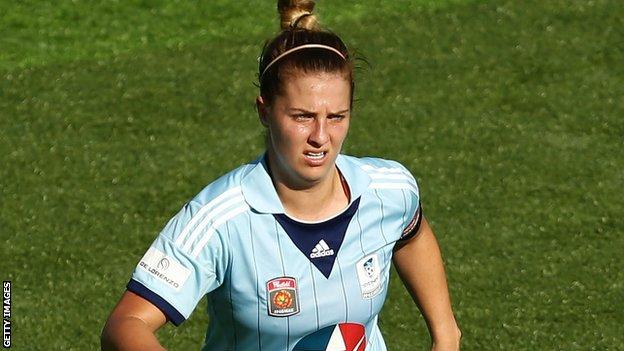 The 25-year-old Sydney FC centre-back, who has one cap to date, joins in the Australian W-League's off season.

I've seen a fair bit of the English women's game...so I'm excited to get going,

She was in the Sydney team which finished second in the table and played against fellow County players Katie Hoyle and Caitlin Friend.

Brogan will join the Notts squad next week ahead of the resumption of the Women's Super League on 29 June.

"I've been keeping up with the league since it's started and I've been following Notts County's results," she said.

"It's good to be joining a team which have had some good results and I'm impressed with what I've seen.

"I'm quite nervous. Playing in England is something I've never done before but it's a great opportunity and it is exciting.

"I've followed the men's game in England since I was a toddler and I've seen a fair bit of the English women's game as well so I'm excited to get going," she added.

County are currently unbeaten in the WSL and are in third place after one win and three draws.