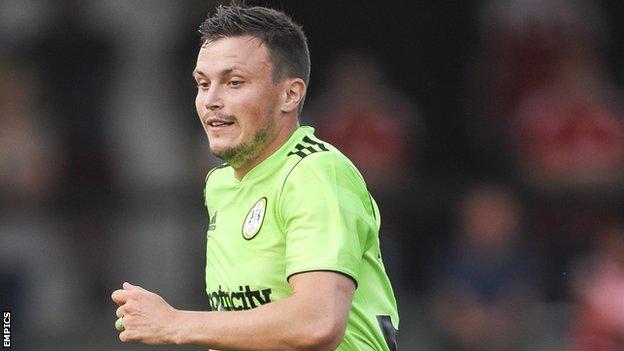 Striker Andy Mangan has returned to training with Forest Green Rovers after successfully appealing against his sacking from the club.

Mangan was suspended for disciplinary reasons under the tenure of ex-boss Dave Hockaday and had his three-year deal cancelled in February.

But the 27-year-old took his case to the Football Conference, who then overturned his dismissal.

Meanwhile, Rovers have confirmed the signing of goalkeeper Steve Arnold.

The 24-year old arrives at the New Lawn following his release from Stevenage.

He played 32 games for Boro during the 2012-13 season but, after struggling with injury, he was replaced as number one by Chris Day.

"Steve's got a presence about him and he'll be good competition for Sam," manager Ady Pennock told BBC Gloucestershire.

"He's a good pro - on and off the pitch - and has that experience of promotions from this league. He ticks all the boxes."

Speaking about the return of Mangan, who spent the end of last season on loan at Luton, Pennock added: "He's still under contract and he's here to get fit.

"He's come in and he wants to get fit. We've given him a fitness programme and we'll go from there."

Mangan signed for Rovers last summer, following his release from Fleetwood, and made nine appearances before his suspension occurred.