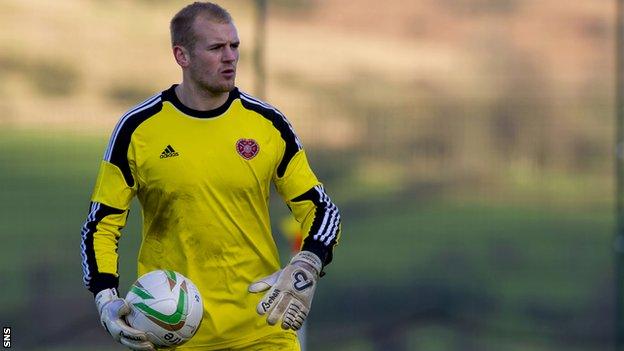 The Scotland Under-21s cap has signed a two-year contract with the Paisley club after passing a medical.

Having joined Hearts from Ross County in 2007, Ridgers only managed four first-team appearances, two of them last season.

And he left the club along with first choice Jamie MacDonald.

I am really looking forward to working with Paul Mathers, who I rate very highly

They were among a number of players released after a takeover by Ann Budge, who is in the process of taking Hearts out of administration.

Ridgers will remain in the Scottish Premiership but will have to challenge Marian Kello, who has signed a contract extension, for a starting place with St Mirren.

"We see development within Mark. At 23, he is relatively young for a goalkeeper, but we have every confidence he will be a valuable addition to our squad.

"He's built like a goalkeeper should be and has a presence between the posts and is also capable of playing the type of football that we will pursue."

Inverness-born Ridgers, for whom Hearts paid County £40,000, spent two loan spells with East Fife and another with Airdrie United while at Tynecastle.

His availability last season was restricted following a knee operation and he now hopes to challenge for the first team with the help of St Mirren's goalkeeping coach.

"I am really looking forward to working with Paul Mathers, who I rate very highly, and I want St Mirren to push on in the new season," said Mathers.

"My hope is to play as many games as possible and to keep improving and progressing."