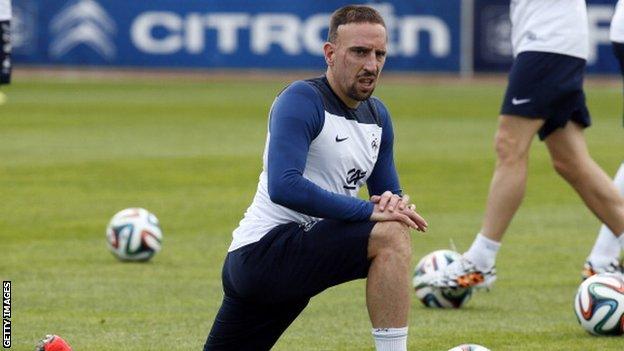 The Bayern Munich player, 31, has been ruled out after injuring his lower back in a training session on Friday.

"He is not capable of training for a few weeks, let alone playing a game," Deschamps told a news conference.

Lyon's Clement Grenier is also out with a hip injury, leading to a call-up for Southampton's Morgan Schneiderlin.

Ribery pulled out of the training session after complaining of pain and was later taken for an MRI scan, which confirmed the extent of the injury.

The three-time French player of the year has been suffering from lower back pains for several weeks, playing only once for club or country since 29 April.

He managed 79 minutes in the German Cup final against Borussia Dortmund on 17 May and missed France's warm-up matches against Norway and Paraguay.

"He had to stop in training, the pain was too strong," added former Chelsea midfielder Deschamps.

"We made checks in the beginning of the afternoon, checks that confirmed the situation has aggravated."

Ribery, who has won 81 caps, was instrumental in France's qualifying campaign, scoring five goals for the 1998 world champions.

But his absence could present an opportunity to either 24-year-old midfielder Schneiderlin or Montpellier attacker Remy Cabella, who have been called into Deschamps' squad as replacements for Ribery and Grenier.

France start their Group E campaign on 15 June against Honduras. Les Blues will also meet Ecuador and Switzerland in the group stage.

He helped Bayern win the German league and cup double in 2013-14.