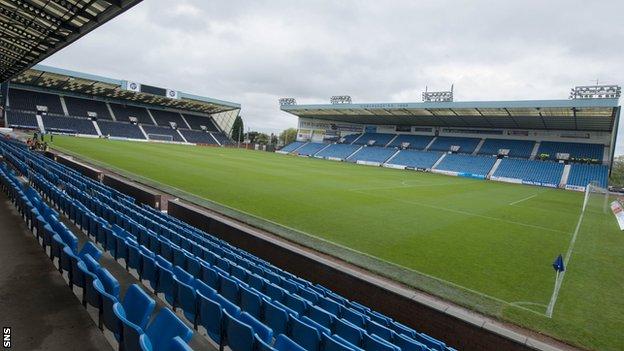 Kilmarnock are to install an artificial pitch during the summer in a bid to make more commercial use of Rugby Park.

It means that, with Hamilton Academical being promoted, two clubs will not be playing on grass in the Scottish Premiership next season.

Funding will be provided by Billy Bowie Special Projects Limited and the Kilmarnock director has high hopes.

‎"This will transform the way the stadium is utilised in future," Bowie told the club website.

"I'm fully committed to making this project happen as soon as possible in order to make Rugby Park the focus of all of the club's activities."

No Scottish top-flight club has had an artificial surface since Dunfermline Athletic returned East End Park to grass in 2005 after a much-criticised, two-year experiment by European parent body Uefa.

Kilmarnock stress that their new surface will be a "top-quality 3G pitch" that meets current guidelines from world governing body Fifa and the International Rugby Board.

Work will commence on the "Fifa 2 Star" surface at Rugby Park on 9 June.

Kilmarnock chairman Michael Johnston said: "The first-team squad will be based at Rugby Park in future, having previously trained at the Glasgow University Sports Campus, and our youth teams will train and play on the new 3G pitch.

"The club's community department will host a full range of courses and activities at Rugby Park and we expect to ‎add more cup finals and other sports events to the limited number which we can accommodate at present.

"In short, Rugby Park will become a seven day per week facility‎ and the hub for all of the club's activities.

"The team will be reunited with the town it represents and the club's supporters will enjoy greater contact with the players and team management. Open training sessions will become a regular event.

"This project would not be possible without Billy Bowie's ‎financial support and every supporter owes him a debt of gratitude and respect."

Killie manager Allan Johnston thinks the surface will help improve the form of a team that narrowly avoided being involved in a relegation play-off.

"This is a fantastic step by the club and the prospect of training and playing at Rugby Park is really exciting for everyone associated with the first-team squad," he said.

"Having our own training base and using a top-quality surface with consistent characteristics all year round will be much better for the players."

The surface will be provided by FieldTurf, which has worked with clubs including Barcelona, Ajax, Arsenal, Schalke and Olympique Lyonnais.