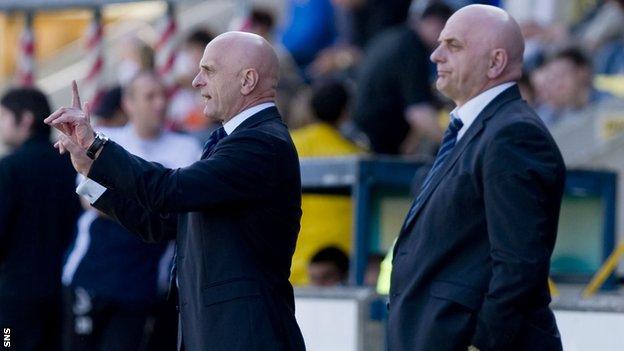 The Campbell twins have ended a six-year partnership at Forfar Athletic after Ian stood down as Dick's assistant due to business commitments.

The 60-year-olds have been together at the part-time club since Dick Campbell was appointed manager in 2008.

His brother is managing director of Dunfermline-based Human Resources.

Forfar said that "with ever-increasing demands on his time, he has had to put his footballing commitments on the back burner for present".

Ian Campbell was a forward with Dunfermline Athletic and Brechin City, who he went on to manage.

After joining his brother at Station Park, he had a spell as caretaker while Dick, who has also managed Dunfermline, Cowdenbeath, Brechin, Partick Thistle and Ross County, battled cancer in 2011.

Forfar said they had no plans to add to their backroom staff, with coaches John Young and Barry Sellars assisting Dick Campbell next season.

"Ian had considered this move midway through last season but was able to continue in his important back-up role," added Forfar's website.

The Loons finished seventh in last season's League One table.