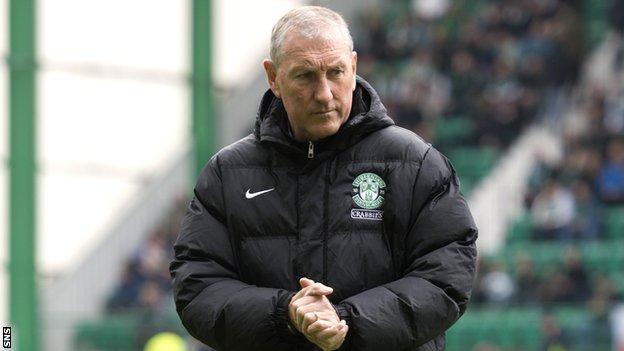 A decision over Terry Butcher's future as manager of relegated Hibernian will be made next week after a meeting with new chief executive Leeann Dempster.

Dempster was interviewed on the club's own You Tube channel.

And she avoided a firm answer when asked if Butcher would remain manager.

"I have plans to meet Terry next week and once we have had that conversation and come to a conclusion about the direction of the club then I will be able to come out and talk," she said.

Dempster had been chief executive of Scottish Premiership rivals Motherwell until last weekend but had visited Hibs' training facility early after they suffered relegation after a play-off defeat by Hamilton Academical.

"I met him for the first time in the capacity of him being Hibernian manager last week when I went to the training facility and, at that time, emotions were very high, relegation had just happened and I am still CEO of Motherwell at that point, so no formal decisions or discussions could take place," she explained.

"Terry went off to finish his family holiday and has since come back and we've spoken on a number of occasions since."

Dempster has arrived at a time when Hibs Supporters Association has launched a campaign to force chairman Rod Petrie, who has previously been taking the executive decisions, to resign.

However, she stressed that she would have autonomy to make the important decisions and that it was too simplistic to blame her predecessor for relegation.

"It has been the challenging first few days - probably the most difficult any new CEO can face," she admitted.

"You can see from the strength and noise from the broader support base that people are not in a great place at the moment and I have to deal with that.

Dempster insisted that the had no thoughts of changing her decision to join Hibs after they were relegated.

"It is not in my nature," she said. "There could have been opportunities for me to do that, but I'd made a decision that I wanted to leave Motherwell and I wanted to come to Hibernian.