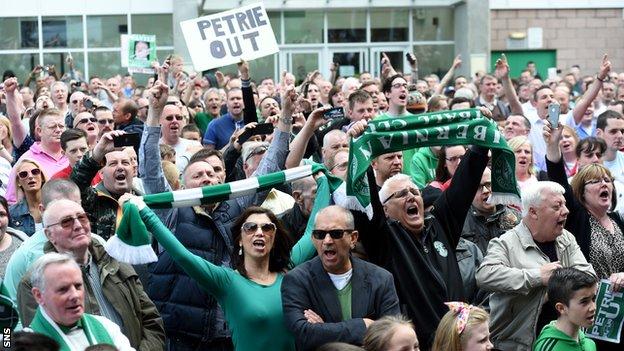 About 1,500 Hibernian fans have gathered at Easter Road to hold a demonstration aimed at ousting chairman Rod Petrie.

Petrie is under pressure following the Edinburgh club's relegation to the Scottish Championship.

Ex-Hibs midfielder Paul Kane is leading the "Petrie Out" campaign and other former players like Gordon Rae and Pat Stanton have supported the rally.

"We asked the question of the supporters would they like us to get in dialogue with the club to see what they would like to with this kind of support," Kane explained at the rally.

"We're going to ask the club that. We'll probably ask the majority shareholder, Tom Farmer, what he would like to do with the support we got. We have to wait for the answers to tell the supporters what's going to happen."

A request to hold the demonstration in the East Stand had been declined by the club and new chief executive Leeann Dempster called for unity as the club prepare for life in Scotland's second tier.

And, speaking to BBC Radio Scotland's Sportsound after the demonstration, Dempster said: "People are very upset at the moment.

"When they get a chance to vent that anger and get in front of somebody at the club then you tend to get on the end of that and I'm happy to do that."

And Dempster, who has been meeting supporters in her first week in post, insists she can bring about the change that is necessary.

"I can't change the past but I can try to influence the future as much as possible and that's entirely what I intend to try to do," she added.

"Rod's essentially passed on all his executive responsibility to me so I'll run Hibernian in much the same way that I did at Motherwell with all the full autonomy and the support of the board to make major decisions and be involved, absolutely, at the coal face of the decisions of this football club.

Meanwhile, a decision over manager Terry Butcher's future is expected to be made next week following discussions with Dempster.