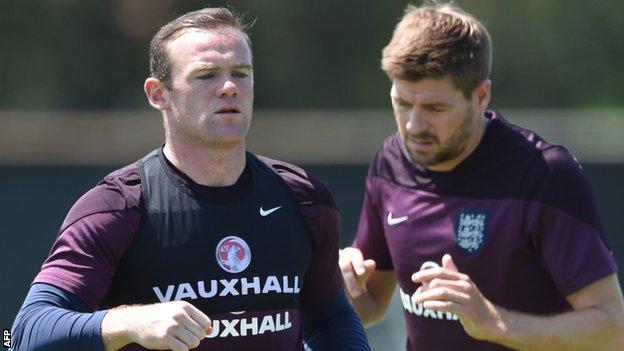 Rooney, 28, has not scored in eight World Cup appearances with England.

"Wayne is a terrific player," Del Piero said. "Now he is more balanced and he is ready to lead this time, I hope."

Rooney has scored 39 goals in 91 international appearances and competed at World Cup tournaments in 2006 and 2010.

However, his place in England's starting line-up has been questioned, with Rooney's former United team-mate Paul Scholes suggesting the forward may be "worn out" after a long career.

Former Juventus striker Del Piero scored 27 goals in 97 games over a 13-year international career that culminated with World Cup victory with Italy in 2006.

Roy Hodgson's England side open their campaign at this summer's World Cup in Brazil against Italy in Manaus on 14 June.

"It will be an open game," Del Piero said. "England are a little bit different to 10, 12 or 15 years ago. Now there are more situations where they can score goals or where they can do something special.

"I think Italy has a good history against England. Italy usually never misses the first game, the second game is historically a bad one for Italy.

"This is what history says but football is beautiful because everything can change in a few seconds."