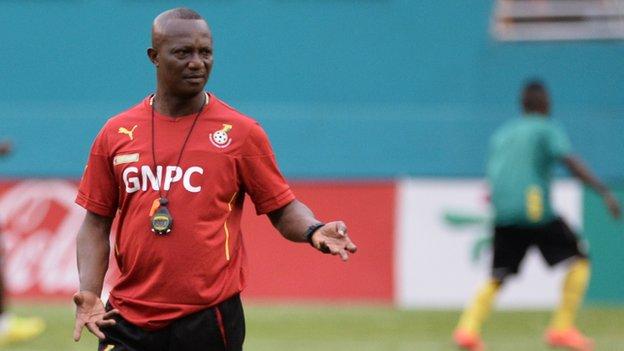 James Kwesi Appiah has come a long way since persuading his father that he should pursue a career in football rather than accounting.

So many of his boyhood dreams became reality as he carved out a professional career as a left-back with Asante Kotoko and was also installed as Ghana captain.

Now, aged 53, the former Black Star is about to fulfil perhaps the most fantastic dream of them all.

On 16 June he will become the first Ghanaian to coach the Black Stars at a World Cup when he leads his side out for their opening game of the tournament against United States in Natal, Brazil.

It will be a landmark moment for Ghana, who will be playing their 10th match at their third finals, and Appiah is highly aware of the sense of occasion.

"As the days draw closer, I get slightly nervous and excited at the same time," he told BBC Sport. "The conversations on radio, the planning, the interview schedules and everything reminds you just how important this tournament is."

Ghana's previous appearances at the world's biggest football tournament were masterminded by Serbians; Ratomir Dujkovic at Germany in 2006 and four years later in South Africa it was Milovan Rajevac, with Appiah his assistant.

Rajevac steered Ghana into the quarter-finals and the Black Stars were cruelly denied a place in the last four by a handball on the goalline by Uruguay's Luis Suarez and then Asamoah Gyan's failure to convert the resultant spot-kick. Uruguay went on to win the penalty shoot-out.

Ghana's performance should have provided a platform for further development and it might have seemed the ideal time for Appiah to be given an opportunity to take the team forward when Rajevac left the role.

Instead Ghana put their faith in another Serbian, Goran Stevanovic, and it wasn't until after the 2012 Africa Cup of Nations that Appiah was trusted to show what a local coach could achieve.

Shooting for the top

Even then there were dissenting voices, those who refused to believe that Appiah could deliver. And the critics' voices grew louder after Appiah's Ghana were knocked out by unfancied Burkina Faso in the semi-finals of last year's Africa Cup of Nations.

"After the Nations Cup in South Africa there were people, including officials, who were convinced I could not take this team to the World Cup," revealed Appiah. "I simply said to them 'allow me to work and I will do it'."

He set about his task, bringing together the big names and new faces in the squad with his disciplined approach - he even earned the nickname Silent Killer among the players for his quiet but strong style of leadership. It was clear to them that Appiah was a man not to be disrespected.

And Appiah's confidence in himself - and his players - proved to be well founded, with Ghana's World Cup qualifying campaign culminating in a final play-off victory over Egypt that sent reverberations across the whole of Africa.

The two-legged tie was effectively over after the Black Stars handed Egypt, who had gone into the tie with a 100% record in qualifying, a 6-1 thrashing in the first game. The Black Stars won 7-3 on aggregate.

It was, perhaps, the moment the team and their coach came of age and it ensured Appiah would make history in Brazil.

"I will be a very proud man on 16 June," he said. "A lot of local coaches have dreamt about leading Ghana to the World Cup but to be the one to do it, after playing for and captaining this team, will be really special."

As well as United States, Ghana will face Germany and Portugal in Group G.