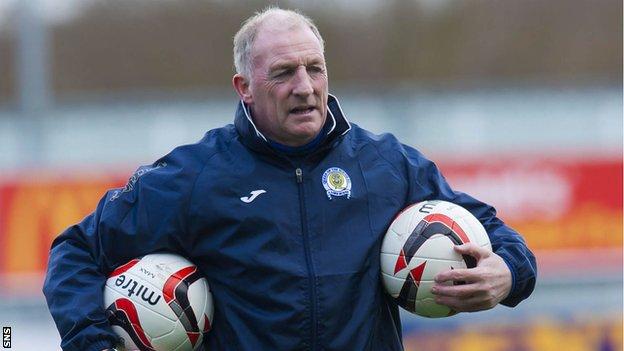 Gerry McCabe has left Queen of the South to become Paul Hartley's assistant on a two-year contract with Scottish Premiership newcomers Dundee.

The 57-year-old was in a similar position under Jim McIntyre at the Dumfries club, joining last summer.

McCabe had previously been assistant under McIntyre and Jim Jefferies at Dunfermline Athletic.

He had a brief spell managing Dumbarton and has been assistant at Kilmarnock, Hibernian and Plymouth Argyle.

The manager will begin the search for a new assistant immediately

Dundee said on their website: "Paul Hartley is particularly pleased to have secured Gerry's services so early in the close season and has known him most of his footballing career."

While Dundee achieved automatic promotion by winning the Championship title, Queens missed out via the play-offs after finishing fourth.

The Palmerston Park outfit said on their website: "The club can confirm that Gerry McCabe has today decided to leave Queen of the South with immediate effect to take up a new role as Paul Hartley's number two with Dundee FC.

"Manager Jim McIntyre would like to thank Cabey for his help and assistance over the last year.

"The manager will begin the search for a new assistant immediately."