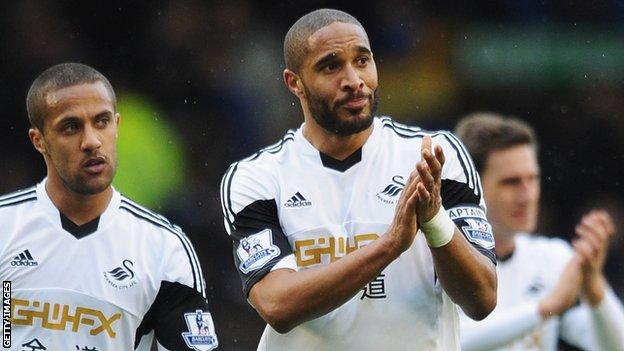 Swansea risk losing captain Ashley Williams for nothing if his future is not resolved, his agent has warned.

Sunderland have bid £4m for the centre-back, who is out of contract at the end of next season and has started talks with Swansea about a new deal.

If no agreement is reached Jamie Moralee says a number of other clubs could firm up their interest.

"Ash has only got one year left on his contract, so clubs will look at that," he said

"If a new contract is not agreed or they don't accept one of the bids, Swansea could risk losing him for nothing.

Ash has to look for a contract that's right for him. He came to football relatively late and, as he's turning 30 this year, he needs a contract that can take him to 33 or 34

"A bid has been made but nothing's been accepted or rejected yet - something has got to give.

"There are two or three clubs interested in Ash, and they must be confident in their ability to compete financially and be up there with Swansea in their offer for him."

Arsenal and Queen's Park Rangers are two of the clubs linked with Wales captain Williams, who turns 30 in August.

If a new contract is not agreed by January, foreign clubs will be able to sign the Wales defender on a pre-contract agreement ahead of a summer move.

It is understood Lyon and Napoli are among those monitoring Williams' situation.

"If Ash's contract does run down, it won't just be Sunderland interested. That will alert a lot of big clubs," Moralee told BBC Wales Sport.

"Swansea hold the aces with Ash because they can keep him and give him a new contract, or they can sell him."

Swansea manager Garry Monk has said he is confident Williams will stay at the Liberty Stadium beyond this summer.

Williams joined Swansea from Stockport in 2008 for £400,000 before signing his current contract in October 2012.

Goalkeeper Michel Vorm and forward Michu have also renewed their deals in the last 18 months, putting them among the highest earners at the club.

"It's not Ash's problem that a club has made a bid for him," said Moralee.

"Ash has to look for a contract that's right for him. He came to football relatively late and, as he's turning 30 this year, he needs a contract that can take him to 33 or 34.

"He has to look out for himself and his family - football is like any other business ."