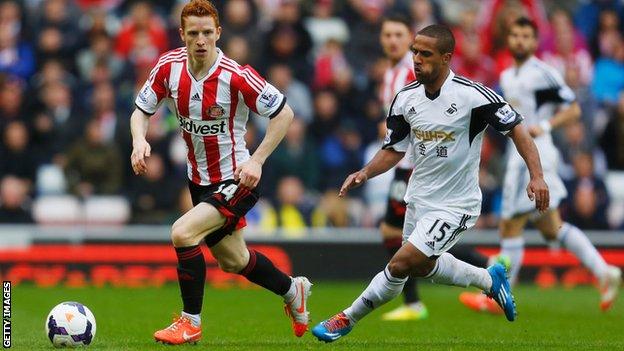 Colback, 24, has agreed a long-term deal at St James' Park after his contract with the Black Cats expired.

"To come to the team I supported as a boy, my hometown team, will be really special for me," said Colback.

Sunderland trained Colback from the age of eight and said the move left "a bitter taste" because they could not recoup their "significant investment".

Representing both sides of the north-east divide

He becomes the first player since Lionel Perez in 1998 to leave Sunderland for the Magpies, although the likes of Titus Bramble, Paul Bracewell, Lee Clark and Barry Venison have represented both clubs.

In a statement, the Black Cats claimed they had "agreed to all of the terms demanded" by Colback and, at the player's and his representatives' request, put talks over his future on hold until the club's Premier League status was secured.

They will receive no compensation as Colback is older than 24, the age at which a fee is no longer payable to a club for their work in developing a young talent.

"To our dismay, however, we were subsequently never given the chance to negotiate with him to stay," the club added.

Colback, who can operate at full-back or in midfield, played 33 times in 2013-14 as Sunderland avoided relegation with five wins and a draw from their final six league games and reached the final of the League Cup.

In all, he made 115 league appearances for the Black Cats.

He added: "If you asked fans around the world the one thing they'd like to do before they die, it would be to play for the team they support and I've got the chance to do that.

"I've only got good things to say about Sunderland. They gave me my chance and I want to thank the fans and the club for all their support."

"He's also a local lad and knows exactly what playing for this club means," said Pardew.