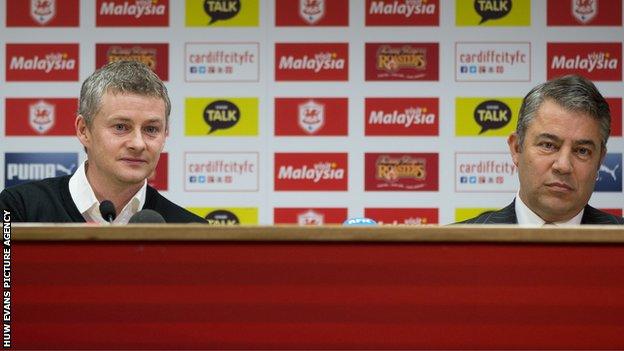 Solskjaer has signed four new players since relegation from the Premier League and Dalman said the recruitment plans showed their intent to gain promotion back to the top-flight.

"[Owner] Vincent Tan is prepared to put his chequebook out and support these hirings," Dalman said.

"That shows the determination to come back from last year's disappointment."

"I wouldn't be surprised if we had another one announced by the end of this week," Dalman told BBC Radio Wales Sport.

We wanted to make sure going forward we have a proper management structure in place that has clear accountability and responsibility.

"One of the criticisms we had last year was the fact we didn't have enough firepower upfront.

"I think we rectified that with the latest signings and obviously what we want to do now is pay attention to the midfield and the defence.

"That's where I think we'll be focusing our efforts in the next couple of months."

Both players are believed to have release clauses in their contracts triggered by the club's relegation to the Championship, although potential buyers would have to meet the Bluebirds' valuation.

"I will be surprised if we didn't get people knocking on the door. I think it's inevitable," Dalman said.

"They're quality players. One [Medel] is the captain of his national side and he's a superb player as we've seen.

"Steve has been a steady performer and a consistent performer at the highest level."

The club criticised the transfer policy of former boss Malky Mackay and his management team and Dalman explained the executive committee would safeguard future transfer dealings.

"The whole objective really is to have a body that takes accountability and responsibility for the decisions it makes," Dalman added.

"Going forward, take the transfer policy, it will actually be impossible for any one person to make a transfer without the committee signing off on it.

"The owner or the owner's representative, myself, the manager and general manager will have to sign off every transfer that we do.

"This is my decision in the way I want to organise the club and this was my recommendation to the board and to the owner and the major shareholder and the supported it.

"I think this is the way it should have been done in the first place.

"We wanted to make sure going forward we have a proper management structure in place that has clear accountability and responsibility."