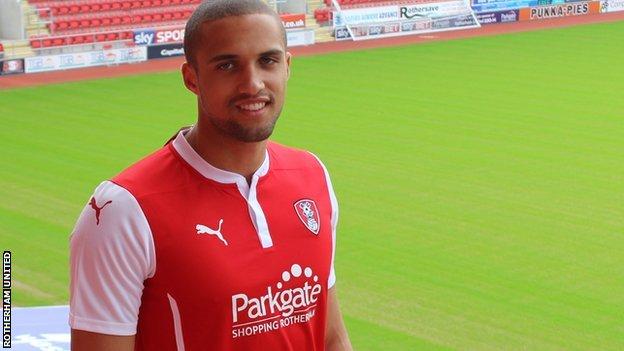 The 22-year-old, who failed to score in 22 games for Villa, has signed a two-year deal with the promoted Millers.

Their previous record was the £160,000 they paid Peterborough for midfielder Lee Frecklington in January 2013.

"We are delighted to sign him, we have been very patient on this deal and are thankful to the chairman in providing the funds," boss Steve Evans said.

"I am thankful to [manager] Paul Lambert at Aston Villa for the kind words he said about Rotherham United and we are just delighted to have got the deal over the line and have young Jordan come on board."

Bowery started his career with Chesterfield before moving on to Villa in August 2012 for a fee of around £500,000.

He struggled to hold down a regular first-team place with the Premier League side and spent a month on loan with Doncaster last season.

The Nottingham-born player has joined goalkeeper Scott Loach, defender Kirk Broadfoot, midfielder Conor Newton and striker Matt Derbyshire in committing to the South Yorkshire side ahead of next season.