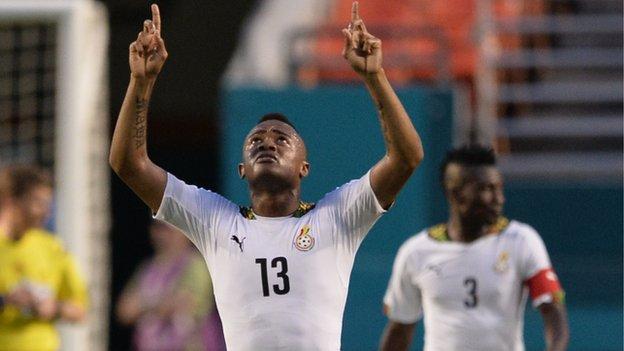 Ghana swept aside South Korea 4-0 in their final World Cup warm-up match as striker Jordan Ayew hit a hat-trick after coming on as a substitute.

Ayew, 22, entered the game in the fourth minute for Majeed Waris, who suffered a leg injury.

And he opened the scoring with a deflected shot 11 minutes later before Asamoah Gyan scored a fine solo effort.

After the break, Ayew rifled in from 20 yards and scored his third from close range with a minute left.

Ghana coach Kwesi Appiah was pleased with his side's performance but remained cautious and played down the significance of the margin of victory.

He told the Ghana Football Association's website: ''It was a good friendly match. 'It's fine we won, but we still have some work to do.

''South Korea attacked really well. Playing against players with good pace, you have to be cautious in the back. We made good use of the counter-attack chances we got.

"The scoreline didn't matter to me. I am not looking at the scoreline, I am looking at how best I will prepare my team and how we played individually and as a team.

"If my team had lost by four goals it would maybe help me to look at the mistakes and correct them before the World Cup."

Ayew's performance will be a boost for Ghana but they will be concerned about Waris, who was in fine form for Valenciennes in the second half of last season.

Waris hit nine goals in 11 games for the French side after joining them on loan from Spartak Moscow and has been tipped to make an impact at the World Cup.

Ghana fans were so excited by their country's dominant display over fellow World Cup finalists South Korea in Miami that in the second half they chanted "we want USA", beckoning on the Black Stars' first opponents in Brazil.

The sides go head to head in Natal on Monday, with Ghana seeking to record a treble over the United States, who they eliminated from the 2006 and 2010 finals.

Ghana will also face Germany and Portugal in Group G.