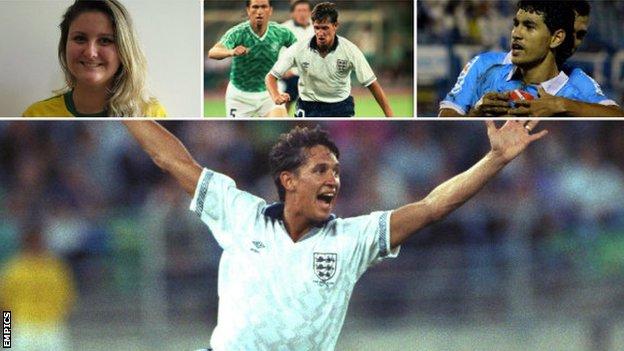 When Angela got pregnant, she agreed with her husband that, if they had a baby girl, they would name her Amanda.

But if they had a boy, they would name him after former England striker Gary Lineker, winner of the Golden Boot as the highest scorer at the 1986 World Cup in Mexico.

In the end, they had a girl - but that didn't stop them from going for their preferred name.

She is not alone. Her parents' idol inspired a whole generation of Linekers in her town in the south-eastern state of Espirito Santo.

But there is no doubt that naming newborn children after leading international footballers is a Brazilian tradition synonymous with the World Cup.

A noticeable surge in Romarios occurred in June 1994, when the former Brazil striker led the national team to its fourth World Cup triumph.

Maria Lucia da Silva, 52, decided to name her son Diego Maradona after the "Hand of God" goal scored by the Argentine captain against England in 1986.

Maradona da Silva, however, does not play football and is not a fan of his own name. The real Maradona, he says, "wasn't a real idol or an example for his own country".

"I was teased throughout my childhood," explains the 26-year-old.

He refused to name any of his own children after a player, but the family tradition continues through his sister's children - four-year-old Thierry Henry and little brother Romario.

Unlike Portugal, for example, where parents must choose names and spellings from a list of 3,000 names, Brazil requires only that the choice must not cause embarrassment to the children.

It is up to registrars to take the case to the courts if they think a name falls into that category.

When they become adults, many will request a change.

Gerson Martins, a lawyer who has helped with more than 100 name changes, says people named after footballers rarely do so.

"They like the advantage of having a distinctive name," he says, but there can be inconveniences.

The Brazilian Klinsmann said he was not interested in football for most of his childhood and only started to follow the game after seeing the Portuguese striker Cristiano Ronaldo in action.

If he has a son, he wants to name him Matthaus, after Lothar, Klinsmann's partner in the West German team and 1990 World Cup-winning captain.

Even before kick-off, the 2014 World Cup has already had an effect on the choice of children's names in Brazil, according to Babycenter, a website that stores more than 60,000 baby names.

David Luiz has just broken into the top 100 most popular names in the country, thanks to the popularity of the Brazilian defensive midfielder.

"I want him to be a champion," says Lenilda Bezerra, 29, whose child, due in three months, will be called Neymar.

"Everyone told me I needed to honour my name, so I made an effort," said the 21-year-old footballer who plays for Aguia de Maraba in the third division of the national league in northern Brazil.

Despite his connections with the sport, Lineker says he will be forced to join the many other Brazilians who cannot afford tickets to watch the games and oppose the government's high public expenditure in staging the event.

As will Michel Platini da Costa Goes, a 28-year old carpenter. "There will be many strikes and much disorganisation," he says.

Steel worker Edson Arantes do Nascimento Souza, 43 - aka Pele - is pessimistic on the hosts' prospects, unlike his namesake.

"The way things are, I think it will be difficult for Brazil to win this one."