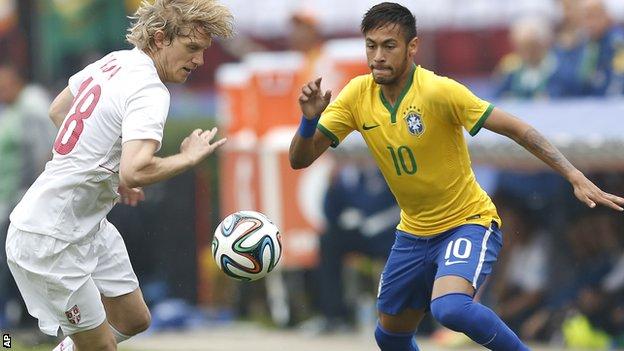 Brazil legend Pele is concerned striker Neymar is under too much pressure to inspire the hosts to World Cup glory.

Neymar, 22, has not played in a World Cup but has scored seven goals in Brazil's run of nine successive wins.

"Neymar is young," Pele told Gary Lineker in a BBC Match of the Day interview. "It is a heavy pressure for him to get all the responsibility."

Brazil have won the World Cup a record five times but have not lifted the trophy since 2002.

The hosts, who face Croatia in the tournament opener in Sao Paulo on Thursday, won the 2013 Confederations Cup, beating world champions Spain 3-0 in the final.

Neymar, who plays his club football for Barcelona, grabbed the headlines with his performance in that game and scored Brazil's second goal with a rasping left-foot shot.

Luiz Felipe Scolari's side have also won nine successive friendlies since defeat by Switzerland in August, scoring 30 goals and conceding only two.

"For the first time in history, Brazil has a defence better than they attack," said 73-year-old Pele, his country's all-time leading scorer with 77 goals.

"The midfield back is fantastic. Very organised. I hope we can adjust from the midfield forward."

Watch more of Gary Lineker's interview with Pele in a Match of the Day World Cup Preview show on Wednesday on BBC One at 22:35 BST.