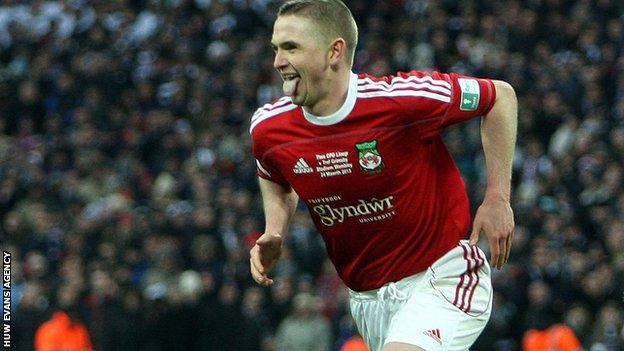 Midfielder Johnny Hunt has turned down a new contract with Wrexham and is set to join an as yet unnamed League Two club.

The 23-year-old, a graduate of the club's centre of excellence, was out of contract but had been offered a new deal by manager Kevin Wilkin.

Wrexham are understood to have agreed a compensation payment for Hunt, who was the club's top scorer last season.

"He's earned his right to play in the Football League," Wilkin said.

Talking to BBC Wales, Wilkin added: "We've accepted an offer of compensation for Johnny's services, that'll allow him to move on and play his football at a higher level than what we are.

"We didn't want to stand in Johnny's way, he's been a good servant to the club and we wish him well for what he does in the future.

"As a club we've always had that reputation for bringing youngsters through and progressing them.

"We... realised Johnny had the desire to play at the highest possible level that he can.

"So all things being considered, hopefully it's a resolution that suits everybody and will enable me to bring somebody else in that will have to fill Johnny's boots."

Liverpool-born Hunt made his Wrexham debut against Hayes & Yeading in April 2010 and played over 100 times for the Dragons.

Wilkin conceded that the transfer would leave Wrexham needing to make a few summer signings.

"Most areas of the field need bolstering," said Wilkin.

"Johnny down the left hand side will leave us a little bit exposed down that area.

"We have Elliot [Durrell] to come back in and play, he's had an operation towards the end of the season, but he's been back in training.

"There's been no ill-effect there and he'll be good for the start of the season.

"And if it falls within the budget... we'd look at and consider anything."

Hunt told the club's website deciding to leave the Dragons was the "hardest decision" he has ever had to make.

"I would like to take this chance to thank everybody at Wrexham Football Club," said Hunt.

"It's been a massive part of my life for the past 14 years and it was the hardest decision I have ever had to make in leaving the club.

"I feel the time is right and the opportunity to play League football is something I have always dreamt about.

"It's been a pleasure and I wish Wrexham success in the future."