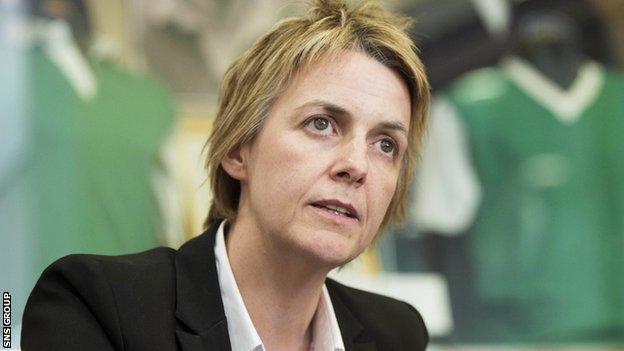 As Hibs begin the search for an eighth manager in 10 years, chief executive Leeann Dempster has an open mind on a replacement for Terry Butcher.

The 55-year-old was sacked after just seven months following relegation from the Scottish Premiership.

"If you have someone in mind, you can be closed and that can be difficult," Dempster told BBC Scotland.

"There is pressure to move quickly but we need to make sure we get the right person in."

The Easter Road side dropped from the top flight, along with Edinburgh rivals Hearts, following a dismal run of results under former Motherwell and Inverness boss Butcher.

There were only six victories during Butcher's 29-game tenure - four of those coming in the first seven outings.

It's a big, big club and whoever comes in needs to understand that dynamic

Dumbarton's Ian Murray, a former Hibs captain, has already been linked with the post, as has Stuart McCall, who worked with Dempster at Motherwell - steering the club to back-to-back second place finishes in the top division.

However, Dempster, who has been in the job for 10 days, would not be drawn on any names so soon after announcing Butcher's departure.

"My job is to look to the future, to try and rebuild the club," she added.

"You have to learn from mistakes and learn from experience and hope the next decision you make is the right one.

"We need to attract the right person to this club who will hopefully be here for some time.

"A number of people will put themselves forward and it may well be that the person comes from that group or we may have to look further afield."

Next season will be just the second term Hibs have spent outside the top flight since World War II and more than 18,000 fans turned up for the second-leg play-off loss to Hamilton.

"It's a big, big club and whoever comes in needs to understand that dynamic," Dempster continued.

"There is a different dimension to a club of this size and the pressures that come with that.

"That's something we need to take into consideration and make sure the person understands that.

"Easter Road can sometimes be a difficult place for players and managers and we need to confront that head on.

"We want to move on from the Championship as quickly as possible.

"We want to be in a position to at least have the opportunity to get back into the Premiership at the first go."

Fifteen players have moved on since the season ended and the new campaign kicks off on 26 July in the Challenge Cup.

"There has been a high turnover of players in recent years and we need to try and stop that," said Dempster.

"That would be part of my planning process, finding some kind of continuity and my job is to find someone who will take the club forward.

"We have to be optimistic for the future. If anything good can be presented from relegation, it's the idea that the club can be reborn."