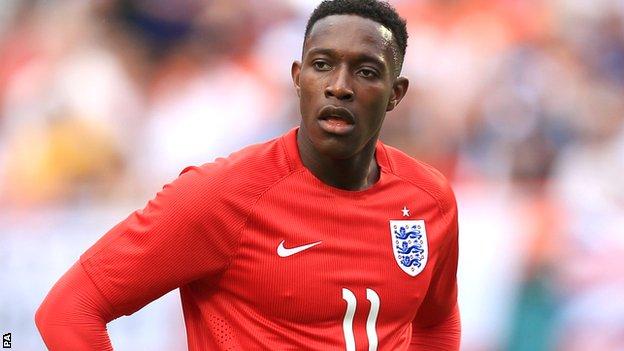 England will give a fitness update on Danny Welbeck on Wednesday after he emerged as a potential injury worry for Saturday's World Cup opener with Italy.

The Manchester United striker, 23, is said to have a thigh problem following a training session at England's Urca military base headquarters on Tuesday.

If he is ruled out, it will increase the chances of Liverpool winger Raheem Sterling facing the Italians in Manaus.

The absence of Welbeck would be a serious blow for Hodgson, who is a huge admirer of the often unsung attacker.

Sterling had been a serious contender to play against Italy anyway after creating a big impression in training, with Hodgson even contemplating using his pace and drive just behind his Liverpool team-mate Daniel Sturridge and pushing Wayne Rooney to the left.

Hodgson said on Tuesday that Sterling was "as fit as a flea" despite only playing for 39 minutes in the past five weeks.

He was suspended for the goalless draw with Honduras in Miami on Saturday having been sent off 15 minutes after coming on as substitute against Ecuador.

"He's as fit as a flea and I'm pretty certain he hasn't forgotten how to play matches either," said Hodgson.

"Raheem Sterling is very much in the group of players I'm considering.

Hodgson has revealed his players will take malaria tablets before they head to the Amazonian rainforest to face Italy on Saturday - despite fears of possible side-effects.

Hodgson and his squad fly to Manaus on Thursday morning and will start taking the tablets two days before they leave - and for five days afterwards - as a precaution against the illness.

"I've got to go with medical opinion," said Hodgson. "If the doctors are telling me that when we go to Manaus the players must take malaria tablets, whether it has side-effects or not, what can I do?

"The bottom line is better stomach cramps for one player in 10 rather than have someone contract malaria."