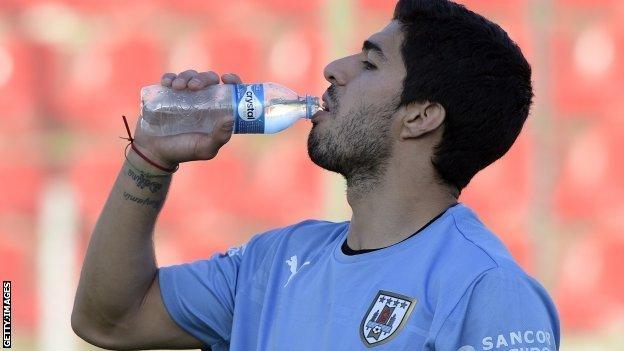 Striker Luis Suarez is working overtime to be fit for the World Cup as he recovers from knee surgery, says Uruguay team-mate Cristian Rodriguez.

Uruguay open their Group D campaign against Costa Rica on Saturday, but coach Oscar Tabarez does not know when Suarez will be available.

Winger Rodriguez said Suarez, 27, is doing all he can to return quickly.

"He is very focused," he said. "He is working in double and triple shifts and we hope to have him with us soon."

Liverpool's Suarez had keyhole surgery to repair meniscus damage in his left knee on 22 May.

Tabarez said Suarez is "responding very well" to his training programme and is in good spirits.

He added: "As we have no set deadlines, I don't know if we'll have him for the first match, for the second, for the third.

"If it were up to me, Suarez would play tomorrow."