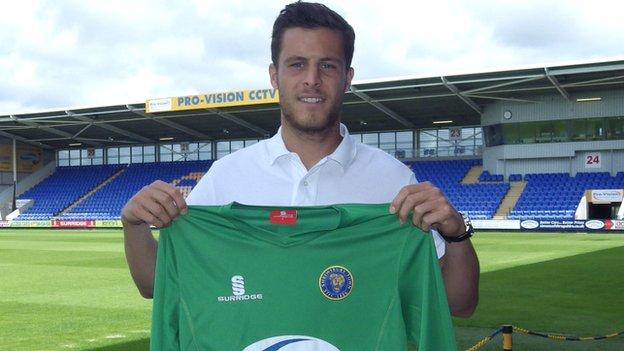 Shrewsbury Town have signed their second new goalkeeper in less than a week by bringing in Jayson Leutwiler following his release by Middlesbrough.

The 25-year-old Swiss, who arrives following Mark Halstead from Blackpool, has agreed a two-year contract.

"I really look forward to meeting Mark at the start of the season, then we see what happens," said Leutwiler.

"Once I spoke to the manager and looked around the stadium I had no hesitation making the decision.

"I'm a very positive goalkeeper. I always try to give my 200 per cent on the pitch."

The 6 ft 4ins former Switzerland Under-20 international was on the books of Neuchâtel Xamax as a youngster before beginning his professional career with FC Basel, moving on to Middlesbrough in 2012.

Leutwiler and Halstead will replace Chris Weale and Joe Anyon, who were released by Mellon in a post-relegation clear-out following consultation with Mike Jackson, who took charge for the final four months of last season, and goalkeeping coach Danny Coyne.