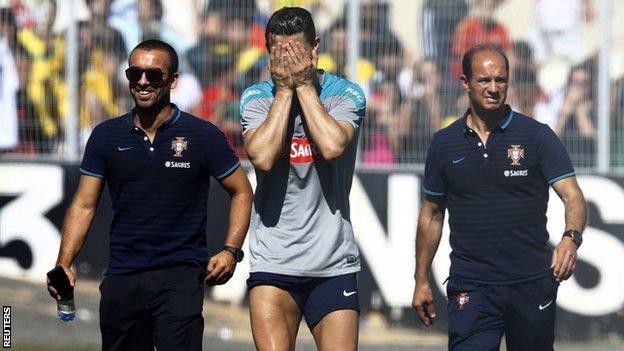 Cristiano Ronaldo limped out of Portugal's training session on Thursday and left the pitch with an ice-pack on his knee.

Ronaldo, who returned in the 5-1 win over the Republic of Ireland, featured early on in Portugal's session before stretching on his own.

Portugal's first match of the World Cup is against Germany on Monday.

The Monaco midfielder said: "Ever since he started to train with us he has been 100% like the rest of us.

"Everything is fine with him but there is some caution, not only with him. Many other players were using ice as well. There is nothing to worry about. The ice is normal after training."

After leaving his team-mates, the former Manchester United player signed autographs for supporters before watching the rest of the session from the bench.

Ronaldo was hampered by injury problems in the final weeks of the season and missed six of Real's final 12 matches of the campaign.

The Portuguese Football Federation (FPF) confirmed he was suffering from tendinosis in the region around his left kneecap on 4 June.