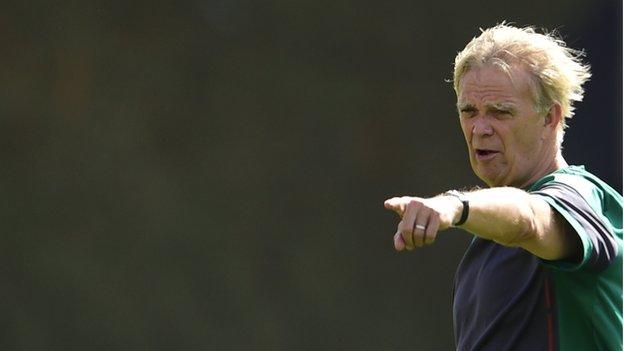 Cameroon coach Volker Finke says Mexico can pose a big threat when the teams meet on Friday despite only just qualifying for the World Cup.

Mexico scraped through to the finals in Brazil via a play-off win over New Zealand but Finke is cautious.

The German said: "After they qualified they found a new base to build on and now they are really dangerous.

"But Cameroon's team spirit is at least as good as Mexico's and we have a good opportunity to get a result."

After Brazil's 3-1 win over Croatia in the opening game of the tournament on Thursday, both Cameroon and Mexico know a win would put them in a strong position in Group A along with the hosts.

Cameroon's preparations were disrupted by a row over players' payments that led to their plane to Brazil being delayed by almost a day.

If the Indomitable Lions are to do well at the tournament, it is vital Finke can create a harmonious atmosphere in the camp and hope that translates to good performances on the field.