Cristiano Ronaldo is hoping to overcome injury to kick off his 2014 Fifa World Cup on what promises to be a fascinating day five in Brazil.

BBC Sport: Mark Lawrenson: "Despite his pre-tournament injury worries, Cristiano Ronaldo should play for Portugal - but it is hard to see him being at anything like full fitness.

"I am going to throw in a bit of a curveball here because I don't think Portugal will get out of the group. Ronaldo has had a long, hard season and it has taken its toll. And if he is absent at any stage, then about 50% of his country's chances disappear with him."

Lawrenson: "Nigeria are a bit like Wigan used to be when they were in the Premier League under Roberto Martinez and I had to predict how they would do every week; I never knew what they were going to do.

"If they play to their potential, Nigeria should beat Iran, but the clash of playing styles between the two teams means that might not be as straightforward as it seems."

Lawrenson: "If Portugal fall flat, then that leaves the door open for one of these teams and, having spent a bit of time with United States manager Jurgen Klinsmann, I am backing them to make it out of the group.

"The US will be so well prepared and their team spirit is second to none. I think they will see off Ghana and reach the last 16." 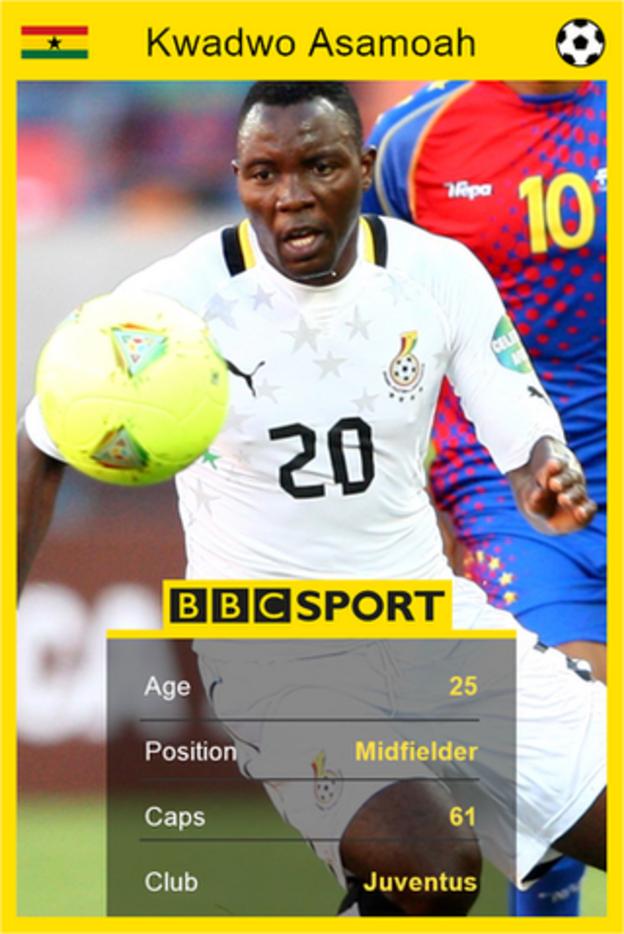 Ghana's Kwadwo Asamoah has established himself as a key player at Juventus, helping them win the Italian title in each of his two seasons there since arriving in 2012, initially in a co-ownership deal with previous club Udinese.

A left-sided midfielder who can play in several other positions, the 25-year-old was used as a wing back in Serie A last season, and has been described as "irreplaceable" by Juve manager Antonio Conte.

He also has good form against the United States, having helped knock them out at the last-16 stage of the 2010 World Cup, in which he played all five games as Ghana reached the quarter-finals.

Portugal's Cristiano Ronaldo is making us all wait to discover if he will recover from a knee injury in time to face Germany - but if he does, his contest with centre-back Jerome Boateng is likely to be pivotal.

Ronaldo, 29, gave Boateng and his Bayern Munich team-mates the run-around at the Allianz Arena in April as Real Madrid stormed to a 5-0 aggregate victory in their Champions League semi-final.

But the Ballon d'Or winner missed two of his country's pre-tournament friendlies with knee and thigh problems, and still appears to be struggling despite playing in the 5-1 victory over the Republic of Ireland in New Jersey last week.

So concerned is Germany boss Joachim Low about the threat of Ronaldo, he has indicated that he might counter by moving full-back Philipp Lahm into midfield to provide protection in front of Boateng, 25.

There's no time for Germany and Portugal to ease into the World Cup, as two of the giants of European football go head-to-head in Salvador in their opening match at 17:00 BST.

The two nations have met at three of the last four major tournament finals; indeed, this is a repeat of their opening group fixture at Euro 2012.

Mario Gomez - not a part of Low's squad this time after missing most of the season at Fiorentina through injury - secured a 1-0 Germany win in Lviv then, although both sides made it through a fiendishly difficult group at the expense of Denmark and the Netherlands.

At the age of 36, Germany striker Miroslav Klose needs one goal to equal Brazilian legend Ronaldo's record of 15 goals in World Cup finals. Can he do it at the expense of the other Ronaldo?

Germany have opened their last six World Cups with a victory; the last time they failed to win their first game was in 1986, when they drew 1-1 with Uruguay in Mexico.

Portugal's Cristiano Ronaldo has scored two goals from a total of 48 shots at the World Cup.

No team scored more goals than Iran in the 2014 Asian World Cup qualifiers (30).

Nigeria's three goals at the 2010 World Cup all came from set-piece situations (one penalty, one direct free-kick and one from a throw-in).

The United States have only kept two clean sheets in their last 23 games at the World Cup.

Scotland fans look away now. Iran's first point at a World Cup came in Argentina in 1978, their debut appearance in the finals. Iraj Danaeifard cancelled out an own goal scored by Andranik Eskandarian for a 1-1 draw to cap a miserable tournament for Britain's sole representatives.

Scotland had earlier lost 3-1 to Peru as even a stirring victory against eventual finalists the Netherlands was not enough to save them.

Iran, though, had to wait until 1998 for their first and only World Cup finals win, a 2-1 victory over the United States in France. Could they double that winning tally on

Curitiba, where Iran take on Nigeria in Group F, has changed a great deal since it hosted two matches at the 1950 World Cup.

Efforts to create a more attractive environment for tourists has turned it into an "ecological capital", with 30 parks.

The city has a significant multi-cultural identity and is home to Germans, Italians, Japanese and Ukrainians. It even boasts the world's second-largest Polish community.