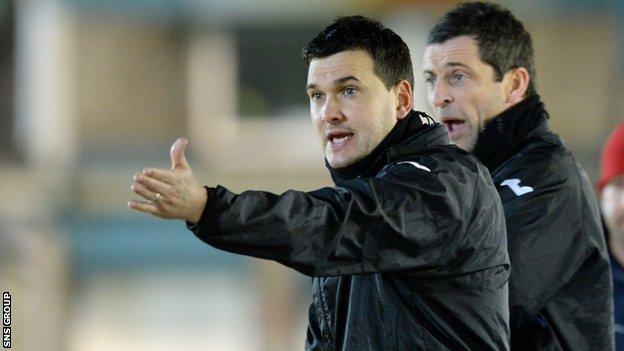 Ian Murray insists it is wrong to assume he would be in a rush to leave Dumbarton should he be offered the chance to manage former club Hibernian.

The 33-year-old is the bookmakers' favourite to succeed Terry Butcher.

"People think, a bit disrespectfully to myself and Dumbarton, that I would automatically jump at the chance," he told BBC Scotland.

"Of course it's an attractive job but you also have to think about long-term ambitions and where you want to go."

Murray, who had two spells at Hibs as a player, has made an impressive start to his managerial career and signed a new two-year contract with Dumbarton in May.

When asked if he would be interested in a return to Easter Road, he replied: "Any player growing up wants to play for the club they support - and I managed to do that.

"I know I'm going to be labelled because I'm ex-Hibs, but it's not a closed book case.

The job is massive for whoever takes over. There is a complete revamp required

"I don't agree with people asking me 'have you taken Dumbarton as far as you can?'

"I always use a very extreme case of Sir Alex Ferguson winning the treble. If that was the case, then he would have chucked it then. But you want to do it again and again."

Butcher was sacked 16 days after Hibs were relegated from the Scottish Premiership via the play-offs.

And, on Friday, chief executive Leeann Dempster said the Edinburgh club had received more than 40 applications for the vacancy.

"We are carrying out diligence on the names that are of greatest interest to us - from those targeted by us and also those who have come towards us - and from that process we are creating our short-list," she told the club website.

"I would hope that we will be able to start talking to people over the next few days."

Hibs will joined in the Championship by city rivals Hearts and Rangers, meaning three of Scotland's biggest clubs will be battling it out in the second tier next season.

"The fall from grace in such a short space of time is remarkable," said Murray of his former team's plight. "But it's a big job in any division.

"The problem is Hibs are in a position they never thought they would be in, so there was no plan B.

"Hearts have known pretty much for the last year that they were going down and Rangers have been planning for two years, so it's the worst possible time for Hibs to be there.

"For teams like Dumbarton it's a fantastic division and if any of those three underestimate the challenge they will be in for a rude awakening because there are some good players and good teams."

Murray made his Hibs debut in January 2000 and was captain before leaving for Rangers in 2005. He returned to Easter Road in January 2008 following a brief period at Norwich, staying until the end of an injury-hit 2011/12 season.

He took charge at the Bet Butler Stadium in November 2012, steering the Sons away from bottom spot to seventh, and last term the part-time side narrowly missed out on the play-offs.

The BBC Scotland pundit added: "The job is massive for whoever takes over. There is a complete revamp required.

"The new manager needs to find players who have the mental strength to pick up results at Easter Road and get Hibs moving."