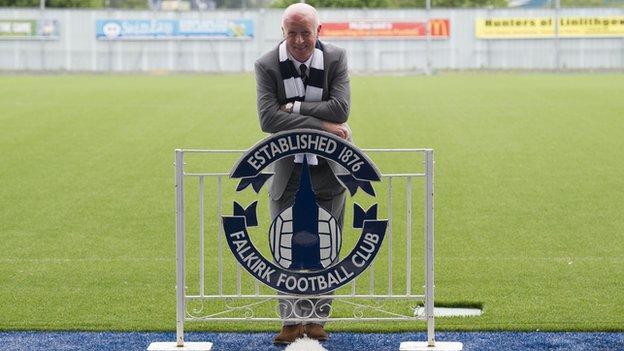 New Falkirk manager Peter Houston intends to appoint a player-coach after taking over from Gary Holt at the Scottish Championship club.

Former Dundee United boss Houston was appointed at the Falkirk Stadium on Thursday.

And as well as keeping Holt's assistant Dale Brooks, the 55-year-old is keen to add another member to his team.

"I have targeted one but he's on holiday just now and he's very, very keen to come," said Houston.

"That'll be finalised at the end of next week when he does come back from holiday.

If we get one or two through from the academy, it's important that there's a pathway for these young guys to get into the team

"I won't mention his name because it's unfair just now.

"I'm speaking to Dale, who is an excellent coach. I met with him for an hour or so. I'm hoping to keep him on.

"He knows the players and I've heard that he's a tremendous coach from a number of people.

"He came up from Norwich City with Gary. I don't want to rid him of a job when he's good at what he does."

Holt returned to Norwich after 14 months in charge of Falkirk. Both he and Steven Pressley benefitted from the club's academy structure and Houston wants to continue with that model as well as bringing in "one or two experienced players".

"If we get one or two through from the academy, it's important that there's a pathway for these young guys to get into the team."

Falkirk reached the semi-final of the promotion play-offs last season but lost to Hamilton Academical, who eventually won promotion to the Premiership.

And, when asked if the Bairns' ambition for the new term had been altered by the new additions to the league, Houston replied in jest: "Well, the board of directors haven't changed, they're wanting up, they want promotion."