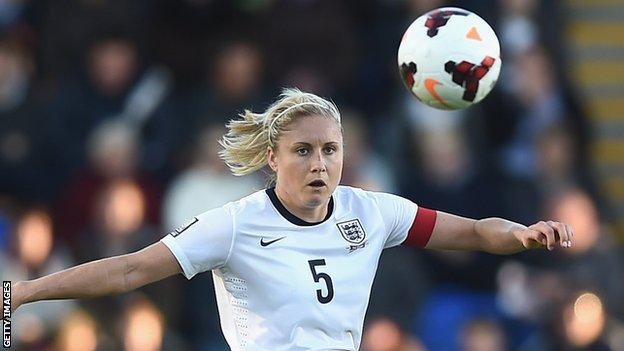 England need just four points from their last three qualifiers to reach the 2015 Women's World Cup finals after a comfortable 3-0 win in Belarus.

First-half goals from Eni Aluko and Steph Houghton set up a victory sealed in injury time by Lucy Bronze.

England have scored 36 goals without reply in their seven qualifiers to date, but head coach Mark Sampson said: "I want us to be more clinical.

"We are very creative but are missing a cutting edge at times."

England trounced Belarus 6-0 at home in September, and Sampson's team had no trouble collecting three points in Minsk to maintain their 100% group record.

Sampson said: "It was a good team performance.

"We kept another clean sheet and that's an aspect of our game we want to continue, but we must look to be sharper at the other end of the pitch."

Chances came and went before Chelsea's Aluko put England in front, latching onto a Fara Williams through-ball to fire in her eighth goal of the qualifying campaign.

Liverpool midfielder Williams then sent in a 36th minute free-kick for captain Houghton to double the lead with a low shot.

Further openings were squandered before half-time, and England rarely looked like adding to their lead after the break.

The result keeps England top of Group Six, five points ahead of second-placed Wales, who beat Turkey 1-0 thanks to a goal from striker Sarah Wiltshire.

England's next game is against Ukraine, whom they beat 4-0 at home, in Lviv on Thursday.

Sampson said: "It won't be easy because Ukraine showed over here that they are well organised and are a threat on the counter-attack.

"We'll have to be wary of that, but we'll be looking to produce a positive performance that can put us three points closer to reaching the finals."