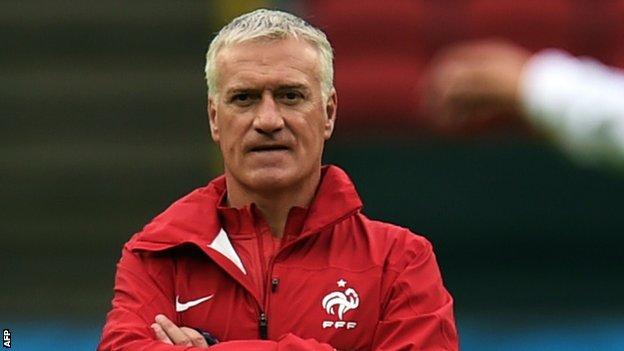 France manager Didier Deschamps claims a training session ahead of their opening World Cup game was interrupted by a drone hovering above the pitch.

Deschamps says the unmanned flying machine was spotted above the team's Brazilian base in Ribeirao Preto.

"Apparently drones are used more and more," said Deschamps ahead of his team's Group E match with Honduras in Porto Alegre on Sunday.

"We don't want intrusion into our privacy. It's hard to fight."

Deschamps, a World Cup winner with France in 1998, said world governing body Fifa was investigating after being alerted to the incident.

"It's not up to me - Fifa handles this and has been carrying out an inquiry," added the 45-year-old, whose playing career included a spell at Chelsea.

Drones are more commonly used to spy on military targets.

France follow up Sunday's match with games against Switzerland on 20 June and Ecuador five days later.