Already craving another serving of Brazilian brilliance? Fear not, because World Cup day six sees Neymar and his pals back in action for their second Group A fixture.

This time the hosts face Mexico in Fortaleza, a match sandwiched between the Group H fixtures of Belgium v Algeria and Russia v South Korea.

Today at the World Cup tells you what you can look forward as well as how to stay across all the action. By the end of the day, all 32 nations will have kicked off their campaigns.

Mark Lawrenson: "Belgium have some very good players and they also have match-winners. Algeria will not be lacking technically or tactically but I am not sure they will be able to live with Belgium's power."

Lawrenson: "Brazil were nervy in their first game against Croatia and they were also given huge help by the referee's decisions because I don't think it was a penalty for their second goal and also Neymar should have been sent off.

"I think they will find it a bit easier in this game, though. Mexico have a decent recent record against Brazil and won their opening game against Cameroon. But, other than that, their form has been pretty poor."

Lawrenson: "I just hope Russia boss Fabio Capello has learned his lesson from the 2010 World Cup when, as England manager, he got his preparation completely wrong.

"Capello has some decent players in his squad and Russia should be too strong for South Korea, who have some skilful players but will have to cope when Russia play rough." 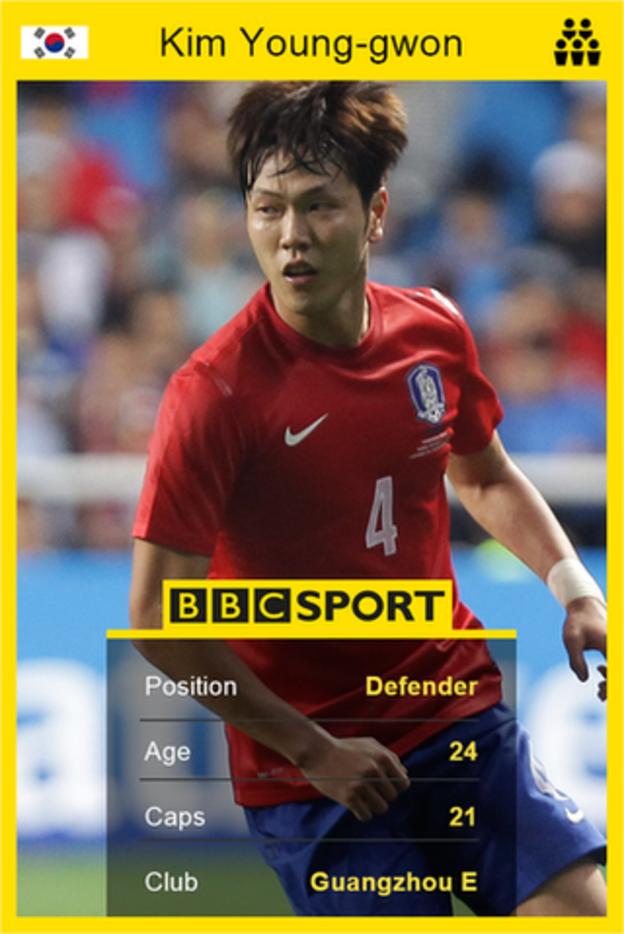 South Korea defender Kim Young-gwon is a robust central defender very much in the mould of national team coach Hong Myung-bo during his playing days.

Still only 24, the Guangzhou Evergrande defender has been tipped for great things by his club manager, Marcello Lippi. And the Italian World Cup-winning coach knows a thing or two about good defending.

Young-Gwon has never played professionally in his native country, having started he career in Japan with FC Tokyo before moving on to J League rivals Omiya Ardija.

Belgium are fancied by many to make a big impact in the tournament and day six is the first chance to see Marc Wilmots' talented squad in action.

Chelsea playmaker Eden Hazard is one of their leading lights and Algeria will have their work cut out to keep him quiet.

The 23-year-old pops up on either wing or behind the central striker. The former Lille star has already been capped 45 times and has scored six goals.

Defender Djamel Mesbah, whose CV includes clubs such as AC Milan, Parma and Basel, likes to get forward but will be charged with keeping a close eye on Hazard. The 29-year-old, who played in the 2010 World Cup, is one of 18 players in the Africans' squad never to have played domestic football in Algeria.

With both sides having both won their opening matches, Brazil v Mexico at 20:00 BST promises to be an intriguing clash. The hosts were impressive enough in their 3-1 victory over Croatia but benefitted from some contentious refereeing decisions to prevail in Sao Paulo.

Mexico might have some sympathy with Croatia, having had two goals ruled out harshly in their opening fixture against Cameroon, although Oribe Peralta's strike meant Miguel Herrera's side came through with three points.

Belgium have not lost a group stage match in their last two World Cup appearances - 1998 and 2002 - drawing five matches and winning one.

Algeria have failed to score in their last five World Cup games, attempting 71 unsuccessful shots since their last goal on 3 June 1986 against Northern Ireland.

Brazil are now unbeaten in 38 successive matches on home soil, with their most recent defeat coming against Paraguay (0-1 in a friendly) in August 2002.

This is South Korea's eighth consecutive World Cup (since 1986); only Brazil, Germany, Italy, Argentina and Spain can boast on longer streaks.

The one previous meeting between Russia and South Korea came in a friendly in November 2013 when Fabio Capello's side won 2-1.

Brazil beat Mexico in the 1962 World Cup in Chile on their way to defending their world crown, the last time the sides have met in the finals.

Winger Mario Zagallo, who was on the score sheet that day, became the first footballer to win the World Cup as both a player and a manager. He won the tournament as a player in 1958 and 1962 before leading Brazil to the title in 1970. He was also assistant manager when they triumphed in 1994.

Germany's Franz Beckenbauer is the only other person to have won the World Cup as player (1974) and manager (1990).

While the steakhouses in most host cities in Brazil serve barbecued meat, big river fish is usually the dish of the day in Cuiaba, where Russia take on South Korea.

Diners can wash down their food with a choice of liqueurs unique to the area. One is flavoured with mangaba - the fruit of the mangabeira tree, a native of Brazilian tropical areas.

Local country music, what Brazilians call musica sertaneja, is one of the area's most popular rhythms.