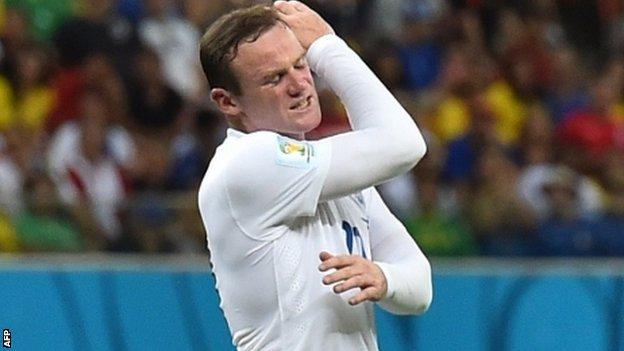 Rooney was played on the left by manager Roy Hodgson in Saturday's 2-1 defeat by Italy in Manaus.

Although the 28-year-old set up an equaliser for Daniel Sturridge, he was largely a peripheral figure.

"I am not so certain Wayne likes playing wide," Taylor told the BBC. "I would prefer to see him up front because that is his best position."

Rooney has failed to shine at a major tournament since he emerged as a potential star at Euro 2004.

With an immediate improvement in results required against Uruguay and Costa Rica in their final Group D games if England are to stand any chance of reaching the knockout phase, Hodgson needs to get the best out of the Manchester United man.

Having faced plenty of difficult situations himself in charge of England from 1990 to 1993, including bringing the curtain down on Gary Lineker's international career when he substituted the striker during a Euro 92 encounter with Sweden, Taylor is acutely aware of the situation in which Hodgson finds himself.

"I'm not in any way, shape or form telling Roy who to select, but for me it's a little bit worrying seeing his performances at the moment," said Taylor.

"They are not of the Wayne Rooney type that we know."

Rooney wasted an outstanding chance to score in the second half, meaning he is still to score in nine World Cup finals matches.

It is a troubling statistic and a remarkable one considering he was England's top scorer in qualification with seven goals.

"When you are a player of Wayne's quality if, for whatever reason, you don't match that when you play, you are going to get criticised," said Taylor. "It is part of life.

"But if you are not playing in your normal position, it doesn't matter how good a player you are, it can affect you."

In Hodgson's search for solutions, former international Alan Mullery suggested on BBC Radio 5 live's Sportsweek that he should consider dropping the striker completely.

"I would leave him out," said Mullery, who won 35 England caps. "He can't play wide on the left-hand side."

It would be an extreme move, bolder than picking teenager Raheem Sterling - one of the major England successes in the Italy defeat.

"It would be a big decision for the manager to make to leave Wayne out," said Redknapp, who was also speaking on Sportsweek.

"Whatever you do you can't win, but I'd play him because he is outstanding.

"I'd look to play Sterling wide and Rooney in the number 10 position."