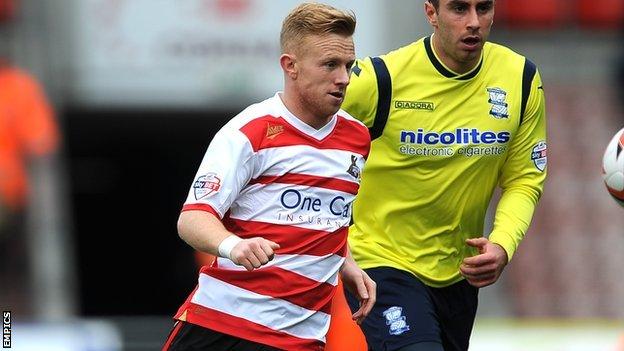 Birmingham City have signed winger Mark Duffy from Doncaster Rovers - the team Blues relegated to League One thanks to their own dramatic final-day rescue.

The 28-year-old Liverpudlian's arrival on a two-year contract completes Blues' seventh deal in just over a fortnight.

Duffy's relegation with Doncaster was his second in successive seasons, having also gone down from League One with Scunthorpe United in 2013.

He did not figure for Rovers on the final day of the Championship season.

He had lost his starting place, coincidentally, following the 3-1 home defeat by Blues at the Keepmoat Stadium in early April.

But he made 39 appearances - nine of them from the bench - following his move from Scunthorpe last summer on a three-year contract for an undisclosed fee.

"It was soul destroying to be relegated," he told BBC WM. "This is a good level for me and to be given the opportunity again for a club like Birmingham City is massive.

"I leave with a heavy heart. They were going to do something similar to what is going on here, signing young, hungry players.

"But the takeover didn't happen, which maybe played a part in relegation as it was always on the players' minds."

Duffy began in non-league football with Vauxhall Motors, Prescot Cables and Southport before making his Football League debut with Morecambe in 2009.

"Starting where I did has made me hungrier to get to the top," he added. "To go from Prescot Cables to Birmingham City takes some believing.

"But it's made me a better player. You appreciate the things that come your way."

Meanwhile, teenager Viv Solomon-Otabor has signed his first professional deal with the Blues.

The 18-year-old winger, who hails from London, has signed a one-year deal, with the option for a further 12 months.

He spent the final few months of last season out on loan with Conference North side Oxford City.

Tyneside-born Thompson, 40, began his career in the same youth set-up as Clark, the famous Wallsend Boys Club and they were both on the books together at Newcastle United.