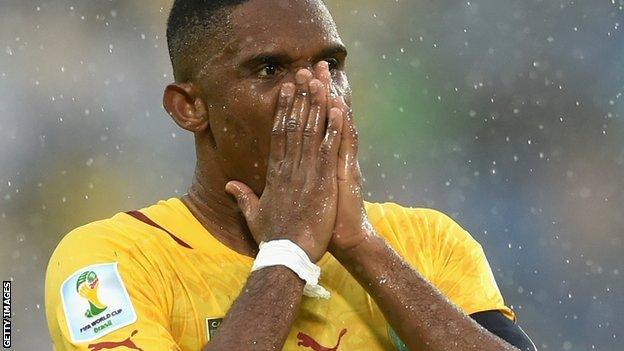 Eto'o has not trained for two days and is unlikely to recover in time for the crucial Group A game in Manaus.

The 33-year-old striker wrote on Twitter: "The doctors confirm I will probably not be able to play because of a knee injury that is causing me pain."

Cameroon and Croatia both lost their opening games and are facing early elimination from the tournament.

The Indomitable Lions fell 1-0 to unfancied Mexico, while Croatia were beaten 3-1 by Brazil. and both sides are aware their campaign would be all but ended by a second consecutive defeat.

Losing Eto'o would be a big blow for Cameroon, who were unable to impose themselves on Mexico and must improve significantly if they are to avoid an early exit.

Eto'o, who suffered a right knee injury at the end of his club season with Chelsea, told Cameroon Radio-Television (CRTV) he was hoping "the gods grant me a miracle and that I am able to defend my dear, beautiful country".

He added: "If this is not the case, I will always play my role as captain and especially as the big brother to push my young team-mates to victory.

"For three and a half months, I have not had the time to recover. You could see that even in the build-up to the World Cup I hadn't had a lot of practice until the friendly against Germany."

"During the match against Mexico, I tried but after consulting the medical staff we realised that I needed a rest. Even in the ninth minute, I felt pain."