Spain will be looking to make amends for their shocking start to the World Cup, on day seven in Brazil.

The holders face Chile in the Maracana and must get something from their second Group B outing following their stunning 5-1 defeat by the Netherlands.

Mark Lawrenson: "Australia will give everything, again, but they just do not have the quality to test the Dutch.

"The only thing for Netherlands to watch out for is complacency. Yes, they had an outstanding win over Spain but they cannot just turn up and think they will win comfortably - they have to apply themselves as well."

Lawrenson: "The defending champions suffered a complete collapse in the second half against Netherlands but if David Silva had scored from a great chance when they were 1-0 up before half-time, I am sure they would have gone on to win from there.

"Yes, I expect Spain manager Vicente Del Bosque to make some changes, including replacing Iker Casillas in goal, and possibly in the way that they play.

"But I also expect Spain to win. Chile beat Australia but that is the game in this group that the other three teams will be expecting to win."

Lawrenson: "Croatia need to pick themselves up because they spent two days moaning about the decisions that went against them against Brazil, and that is probably long enough.

"They need to concentrate on the positives because they played well and caused Brazil some problems, especially Ivica Olic down the left. Cameroon, in contrast, were very poor against Mexico." 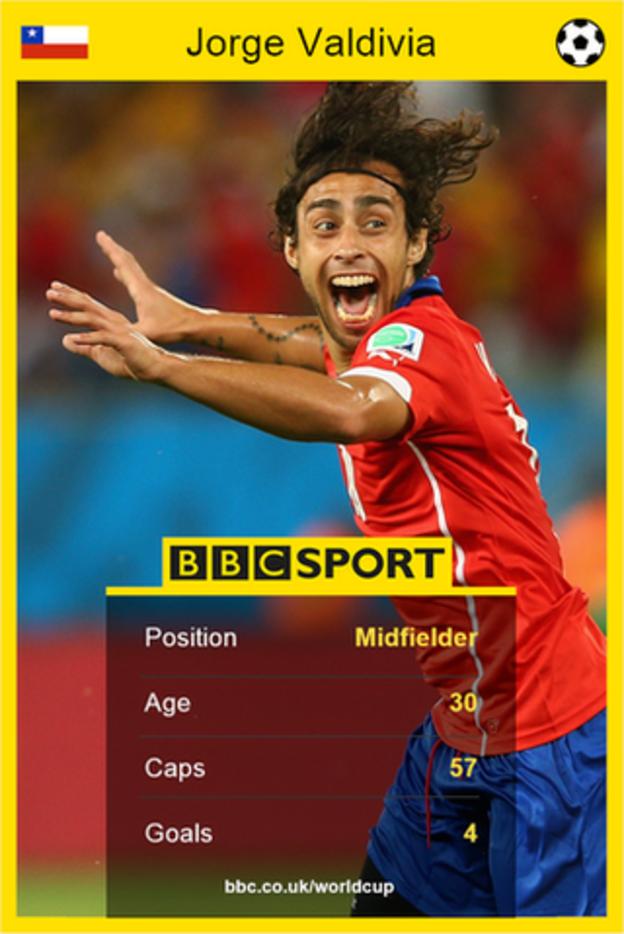 Chile's Jorge Valdivia is a lavishly gifted playmaker. He has courted controversy off the field, but has rewarded coach Jorge Sampaoli's faith in him and scored the second goal in the 3-1 win over Australia on Friday.

This classic number 10 has served two lengthy bans from international football for alcohol-related indiscretions, and was kidnapped in Brazil in 2012.

However Sampaoli has called the 30-year-old an "irreplaceable talent", and compared him favourably to Lionel Messi and Cristiano Ronaldo.

Now playing his club football with Palmeiras in Brazil for the second time, Valdivia's goal against Australia was only his fifth for his country and his first since May 2010.

Barcelona forward Alexis Sanchez could face several of his club-mates, and potentially condemn them to an early exit from the tournament, when Chile play Spain in Manaus.

Sanchez, who became the most expensive player in Chilean football history with his £23m move from Udinese in 2011, scored one and laid on another in the 3-1 victory over Australia that has given his country such a good platform going into their meeting with the World Cup holders.

The 25-year-old's Barca colleague Gerard Pique has been a mainstay of Spain's success in recent years, and could be set to play against Sanchez, but Del Bosque has admitted he could make "some changes" to his side in the wake of the defeat by the Netherlands that sent shockwaves through the tournament.

If Pique retains his place in Spain's back four, how he and his fellow defenders cope with Sanchez will go a long way to determining whether or not the World Cup holders' title defence ends a lot earlier than many would have predicted.

Spain's 5-1 defeat by the Netherlands was the heaviest margin of defeat by a reigning World Cup champion in the history of the tournament. The previous heaviest were Brazil losing 3-0 to France in 1998 and West Germany losing 6-3 to France in 1958.

By netting against Spain, Robin van Persie and Arjen Robben became the first and second Netherlands players to score in three different World Cup tournaments - 2006, 2010 and 2014.

Tim Cahill, with four goals and one assist, has been involved in 56% of Australia's nine goals in World Cup history.

Cameroon only had one shot on target in the whole of their opening group game against Mexico - in the 91st minute.

Croatia have not won any of their past five World Cup matches, losing three and drawing two, with their most recent finals victory coming in 2002, when they beat Italy 2-1.

Spain beat Chile 2-1 in South Africa four years ago, but their first World Cup encounter took place at today's venue, the Maracana, in 1950 when Spain won 2-0.

Both Chile and Australia were in action on 18 June at the 1974 World Cup in West Germany, having been drawn in the same group as the hosts and East Germany.

The Socceroos' interest in their first World Cup finals was effectively ended by their 3-0 defeat by West Germany, and it was to be a further 22 years before Australia made it to another tournament.

On the same day, Chile were held 1-1 by East Germany in West Berlin, and after a goalless draw with Australia in their final group match, the South Americans were also heading home.

Spain's vital match with Chile takes place at the Maracana, one of the most famous footballing venues in the world.

It hosted Brazil's ill-fated meeting with Uruguay in 1950, where the host nation, needing only a draw to win the World Cup, were defeated 2-0 in front of 200,000 people.

The result was deemed a national catastrophe and dubbed O Maracanaco, a Portuguese term roughly translated as 'The Maracana Blow'.

Nevertheless it has subsequently witnessed such memorable moments such as Pele's 1,000th career goal and an emotional memorial service for Garrincha, one of Brazil's greatest and most loved footballers.

The refurbished 73,500-capacity stadium will host the final on Sunday, 13 July.