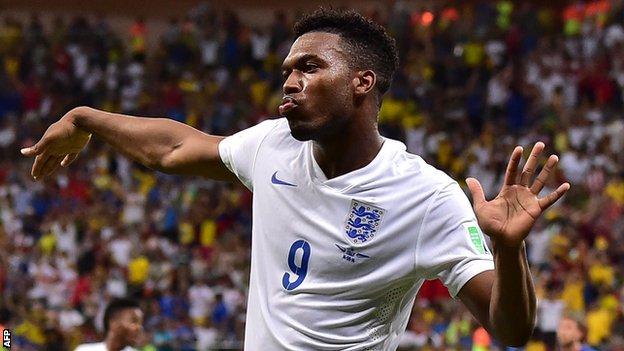 England striker Daniel Sturridge is prepared to do almost anything to avoid an early World Cup exit in Thursday's "do or die" meeting with Uruguay.

Sturridge will be up against Liverpool team-mate Luis Suarez, who infamously handled on the line in the closing seconds as Uruguay beat Ghana on penalties in South Africa in 2010.

While he insists he will stay within the rules, Sturridge said: "I'm going to do anything in my power to win.

Sturridge, 24, said he was feeling "hungry and confident" after scoring in England's 2-1 defeat by Italy on Saturday.

He added: "I'm prepared to do anything to win this next game. It's do or die. It's a World Cup."

Liverpool team-mate Suarez missed Uruguay's 3-1 defeat by Costa Rica following his recovery from a knee operation on 22 May but is ready to face England.

Sturridge has not been in touch with his club-mate, saying his focus is solely on Thursday's game in Sao Paulo.

He added that he would be "devastated" to exit the tournament at the group stage and said the England players would "work our socks off more than we've ever done before".

The former Chelsea player added: "I'm not saying I'm going to dive or do anything that's not within the laws of the game, but I will do anything - like my team-mates - to win this game."

In a reference to the 2010 World Cup, when Suarez denied quarter-final opponents Ghana a match-winning goal by stopping Dominic Adiyiah's header with his hand, Sturridge said he would never do the same thing.

"We're an honest country and go about our business in an honest way," he said. "No disrespect to other countries, but we play within the laws of the game. We don't bend the rules. We play by the book.

Welbeck, 23, said: "I take what Rio says on board. He's seen me grow up and develop from a young kid, from 13. He's helped me a lot as a footballer. If he's telling me to take more risks, I will take more risks."

He said he had spoken to Ferdinand before and after the game against Italy, adding: "He just wants me to be the best I can. He says I need to be a bit more positive at times."