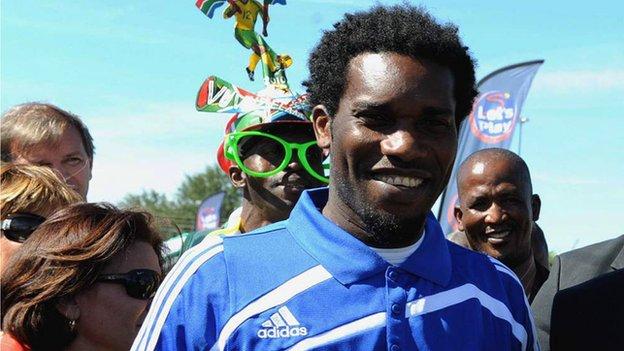 The teams played out the first goalless game of the tournament in Brazil.

"This was a must-win for Nigeria but we did not take it. We did not do enough, we were poor," said Okocha.

"Keshi did not do enough work on the team. The tactical play was so bad, I hold Keshi responsible for this."

In contrast to the pattern of this high-scoring tournament, which has been full of incisive play and attacking verve, Nigeria and Iran laboured through their fixture and created little excitement.

Okocha, who is on the technical committee of the Nigeria Football Federation, was damning in his analysis of Keshi's decisions.

He was particularly unhappy with the coach for replacing Liverpool's Victor Moses early in the second half with Shola Ameobi, who parted company with Newcastle this summer.

"Osaze (Peter Odemwingie) was more creative when he came in, and we needed more in this game," the midfield playmaker added.

Jonathan Akpoborie, a forward for the Super Eagles mainly in the late 1990s, also felt Nigeria got their tactics wrong.

"I believe we lost formation too early in a game we ought to have controlled fully and we started playing long balls which was not our style," he said.

"We grew impatient by the minute and it destroyed our game. We had power, some skill, but lacked team work and organisational play. And without all these things, it was always difficult to win a football game."

Nigeria's next Group F match will be on Saturday against debutants Bosnia-Hercegovina, who lost their opening game 2-1 to Argentina.