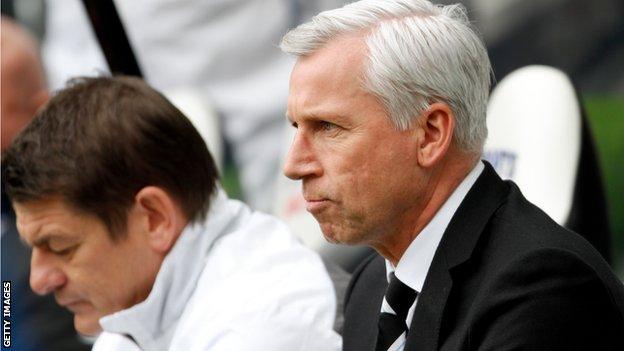 Newcastle boss Alan Pardew believes Manchester City players' involvement at the World Cup could be to the Magpies' advantage in the opening game of the forthcoming Premier League season.

City will visit St James' Park on the weekend of 16 August.

The champions have 11 players competing at the tournament in Brazil, compared to four from Pardew's Newcastle.

"With most of their squad coming off a World Cup, that might give us a slight advantage," Pardew told BBC Newcastle.

"I think bigger sides coming off the tournament might struggle to get going."

Pardew is also confident Newcastle can start the Premier League season without a repeat of the form that ended the previous campaign.

Eight defeats in the final 10 games of 2013-14 ended the season on a sour note, although several of the Magpies first teamers, including on loan striker Loic Remy, were targeting World Cup selection.

"We were affected by the World Cup, there's no doubt about that in my mind," Pardew added.

Despite their disappointing tail-end form, Newcastle did finish the season in 10th place thanks largely to an impressive first part of the campaign.

Boxing Day's 5-1 destruction of Stoke City left the club sixth in the Premier League table with 10 wins from 18 games, but the departure of Yohan Cabaye to Paris Saint Germain was one of several factors in their subsequent slump.

This summer has already seen midfielder Jack Colback added to the squad, along with Spanish striker Ayoze Perez, as Pardew looks to strengthen the player pool before the August kick-off.

"We weren't as strong then as we were in the first half of the season when we lost Yohan Cabaye and didn't replace him, but certainly I'm expecting the team to be much stronger."

"That will give our fans some encouragement and some optimism as it all got very negative towards the end.

"The key ingredient is optimism and that's something we need to give back to our fans."